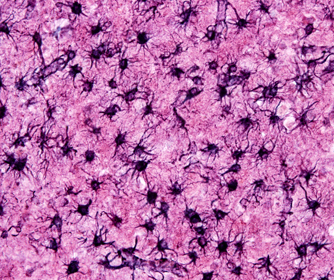 Astrocytes in the human cerebral cortex.

(Jan. 25, 2016) -- Carlos Paladini, UTSA associate professor of neuroscience, has received a $1.8 million grant from the National Institutes of Health to take a closer look at dopamine bursts in the brain. Paladini, who has done extensive research on methods to treat drug addiction by manipulating dopamine levels, hopes that this new undertaking could help people afflicted by clinical depression, drug addiction, schizophrenia or Parkinson’s disease.

Part of Paladini’s central focus will be dopamine bursts, pops of electricity in the brain that occur as neurons communicate that something exciting is about to happen. For example, a hungry person visits their favorite restaurant and sees their plate coming to the table, which causes some excitement and joy. This reward is caused by the dopamine burst in that person’s brain.

“Drug abuse hijacks that entire system,” Paladini said. “When your brain is addicted to drugs, things that bring you joy, like relationships or food, no longer bring that dopamine reward. You are only able to obtain it from drugs.”

The second part of Paladini’s focus is astrocytes, which act as messenger cells, collecting all the sensory data to let the dopamine cells know that something exciting is about to happen. He likens them to bouncers at a club.

“If the right kind of information reaches an astrocyte, then the dopamine will start firing a burst,” he said.

Because astrocytes, unlike neurons, don’t use electrical signals to communicate with each other, they’re hard to study and aren’t very well understood among neuroscientists. Paladini hopes that by gaining a better understanding of them, he can advance drug therapy to help people with diseases that are affected by dopamine levels.

UTSA’s brain research is supported by the UTSA Neurosciences Institute, of which Paladini is a member. The institute, which is part of the Department of Biology, is made up of more than two dozen top-tier scientists, studies the biological basis of human experience and behavior, as well as the origin and treatment of nervous system diseases.

“If people have overactive dopamine systems, they might hear voices, which is a symptom of schizophrenia,” he said. “On the opposite end of that spectrum is depression, whereas not having any dopamine is a sign of Parkinson’s.”

Too many astrocytes is a sign of Post Traumatic Stress Disorder (PTSD), which can occur as the result of a traumatic brain injury and is a common disorder among soldiers returning from war.

“Any kind of changes or disturbances in these astrocytes can affect these diseases known to be related to dopamine,” Paladini said. “The dopamine system is rewarding. When doesn’t work, those rewards don’t occur for things that should make us happy, and we become depressed.”

Some drugs to treat dopamine-related ailments are already being used, and more are now in clinical trials, though astrocytes are still generally mysterious to neuroscientists.

“We can’t improve upon these drugs unless we understand the cells they’re affecting,” he said. “That’s the best possible road to take.”