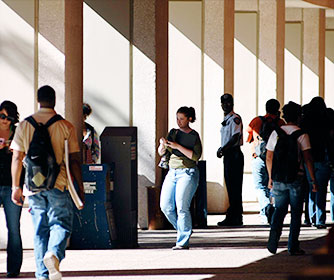 (Feb. 18, 2016) -- The needs of Hispanic-Serving Institutions (HSI) are as diverse as the populations they serve, according to UTSA researchers Anne-Marie Núñez, Gloria Crisp and Diane Elizondo. In a newly published article in The Journal of Higher Education, the UTSA researchers say there are six broad classifications that can be used to differentiate HSI-designated colleges and universities found in the U.S. and Puerto Rico.

The U.S. Department of Education, which developed and assigns the HSI designation, broadly defines a Hispanic-Serving Institution as an accredited, not-for-profit two- or four-year institution of higher education whose full-time undergraduate enrollment is at least 25 percent Hispanic. UTSA, a designated HSI, has a 53 percent Hispanic or Latino undergraduate population (fall 2015).

Institutions that receive the HSI designation are eligible to compete for funding under the Department of Education’s “Developing Hispanic-Serving Institutions program”. But, prior to the release of Núñez, Crisp and Elizondo’s article, researchers did not have a framework through which to conduct more granular, detail-oriented research into HSI-designated colleges and universities which could be useful to policy-makers and agencies allocating resources and funding.

“Hispanic-Serving Institutions aren’t as similar as we might assume, and, in fact, the differences of between them can be striking,” said Núñez, an associate professor of educational leadership and policy studies with the UTSA College of Education and Human Development. “Before now, we didn’t have a way to really talk about these differences in a meaningful way—which is why my colleagues and I decided to create a classification system which could help.”

In 2014, the U.S. Census Bureau projected that the Hispanic population in the U.S. would surpass 100 million, reaching 120 million by 2060. As a result, the number of designated HSIs in the country is also growing. Between 1994 and 2014, the number of designated Hispanic-Serving Institutions grew from 180 to 409. An additional 310 institutions are considered emerging Hispanic-Serving Institutions.

To create their new classification system, Núñez, Crisp and Elizondo studied colleges and universities with HSI designations located in the U.S. and Puerto Rico. The resulting six classification clusters are meant to provide a loose framework that allows educators, researchers and policymakers to compare the performance of HSIs, and to compare HSIs against other non-HSI colleges and universities. Each cluster includes institutions that share similar characteristics, including similar expenditure and revenue rates, resource allocation, graduation rates or even geography.

According to researchers, HSIs will likely fall into one of the following six broad classifications:

“Designated Hispanic-Serving Institutions will soon be competing for funding from the same sources, even as they have different needs,” said Crisp, associate professor of educational and leadership studies. “We feel that it is extremely important for stakeholders, such as institutional leaders and policymakers, to have a classification system that will ease how they refer to and think about HSIs in the U.S. and Puerto Rico. Our system is a jumping off point that we hope will lead to more meaningful research and policy decisions.”

“Mapping Hispanic-Serving Institutions: A Typology of Institutional Diversity” by Núñez, Crisp and Elizondo is available in The Journal of Higher Education, Volume 87, Number 1, January/February 2016, pp. 55-83, published by the Ohio State University Press. The research was funded by a grant provided by the Hispanic Association of Colleges and Universities Higher Education Research Collective. UTSA is a member of the Hispanic Association of Colleges and Universities.