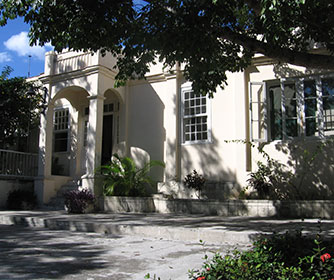 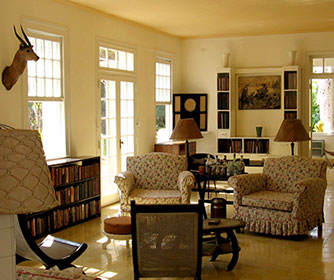 (April 11, 2016) -- William Dupont, San Antonio Conservation Society Endowed Professor of Architecture at UTSA, is part of a top-tier team of preservationists working on a historic restoration project in Cuba. The project is sponsored through a 12-year partnership between the Boston-based Finca Vigía Foundation and the Cuban Ministry of Culture.

Dupont and his team will aid in the construction of a new archival storage facility at Finca Vigía, or “Lookout Farm,” the famed home of the late writer Ernest Hemingway in San Francisco de Paula, Cuba. Once completed, it will be the first building in Cuba constructed using U.S. materials since the late 1950s.

The new facility will be a conservation workshop that will serve to preserve the many artifacts and mementos that Hemingway left behind at Finca Vigía prior to his death in 1961. It will be built using materials and funding provided by U.S. organizations, including the Caterpillar Foundation and Caterpillar Inc., the AT&T Foundation, the Ford Foundation and American Express.

Hemingway is one of the most influential American writers of the 20th century. Throughout his prolific career, he won many awards for his works, including both the Pulitzer Prize and the Nobel Prize for Literature. Though well-known for his time in Spain and France, he spent much of his adult life – from 1939 until 1960 – in Cuba. In fact, he wrote several famous works while at Finca Vigía, such as For Whom the Bell Tolls, The Old Man and the Sea and Islands in the Stream.

After Hemingway’s death, the Cuban government took ownership of the home. It became a museum to Hemingway’s life in Cuba and his work. Finca Vigía, also known as the Museo Hemingway, is now among Cuba’s most popular tourist sites. Even so, it previously ranked as one of the most endangered historic sites in the world, according to a 2005 report from the National Trust for Historic Preservation.

“Finca Vigía is really quite an amazing piece of history,” said Dupont, a fellow of the American Institute of Architects and the director of the Center for Cultural Sustainability, housed in the UTSA College of Architecture, Construction and Planning. “You get a real sense of Hemingway’s daily life. One can see the pool where he swam, the books he read, the typewriter he used, the records he listened to and even the bottles of liquor that he drank, right where he left them.”

Thanks to special permission from both the U.S. and Cuban governments, Dupont has spent the last 11 years of his career traveling to Havana to advise on matters relating to architectural preservation. Throughout the project, he has navigated political change, language barriers and the ever-present threat of hurricanes.

“William Dupont has worked collaboratively with U.S. and Cuban architects and engineers over the last 11 years and has helped our project make great strides,” said Mary-Jo Adams, executive director of the Finca Vigía Foundation. “His finesse and understanding of the Cuban people has been incredibly important. We at the Finca Vigía Foundation are excited to begin this new phase of our long-standing and important project alongside Dupont and our other partners.”

The construction of the new archival facility will take place later this year.

Learn more about the Finca Vigía Foundation and its mission.

About the UTSA Center for Cultural Sustainability
Through the UTSA Center for Cultural Sustainability, housed in the College of Architecture, Construction and Planning, Dupont and his colleagues explore the continuity of the cultural systems of human existence and the common identities of heritage that bind people to places. The center provides research and services to benefit communities, convenes leaders in the field for dialogue on sustainable development and construction, and provides research opportunities for UTSA faculty and graduate students.

Learn more about the UTSA College of Architecture, Construction and Planning and the Center for Cultural Sustainability.