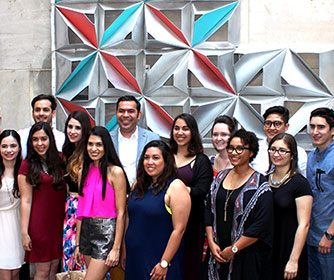 City-sponsored project is part of the Architecture That Engages design program. 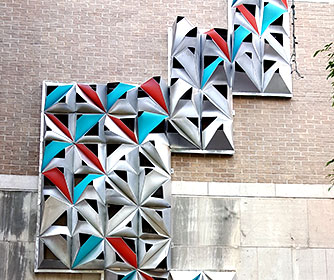 (May 16, 2016) -- UTSA Architecture students recently unveiled a public art installation mounted on the façade of the Houston Street Parking Garage, located at 240 E. Houston St. in downtown San Antonio. For the next six months, the students’ artwork will greet drivers and pedestrians as they travel down Houston St.

Since January, Armando Araiza, assistant professor in the UTSA College of Architecture, Construction and Planning, and his class, working together as the UTSA studio “Society One Nine,” have toiled away on a design for an art installation that engages the community and showcases their architectural talent.

According to Araiza, the project is inspired by San Antonio's progression as a city. While studying maps of San Antonio, Society One Nine chose points of interest to craft a story of the city’s unique history. The points were then connected in ways that guided the installation’s basic shape.

“The students focused on designing an architectural installation that celebrates our city’s future and respects its deep, cultural heritage,” Araiza said. “They began with a traditional architectural analysis of Houston Street and expanded it to consider the entirety of downtown and San Antonio’s vast reach.”

“MORF,” Society One Nine’s finished design, is composed of 128 individual aluminum modules clustered to create 16 unique tiles. The tiles, designed to look similar to handmade Mexican "talavera" tiles, are hung in a way that evokes a map of San Antonio. Its title refers to an optical illusion its unique shape creates.

“In addition to honoring San Antonio’s past and future, MORF is an interesting statement on perception,” said Araiza about the design’s title. “Due to the nature of how it is formed, you can see it morph colors – red or blue or both – depending on how you’re walking up or down Houston Street. In a way, the students have created a piece that moves with you."

The semester-long project was completed for the “Architecture That Engages” design program, sponsored by the City of San Antonio’s Center Development and Operations Department (CCDO), the American Institute of Architects’ San Antonio Chapter (AIA San Antonio) and Centro San Antonio. The students were challenged to design, fabricate, install and dismantle a unique architectural piece that would serve as a public art piece for the city-owned Houston St. Garage.

Society One Nine’s installation was unveiled at a special ceremony that featured Councilman Roberto C. Treviño (District 1), who is a patron of the “Architecture That Engages” program.

“I want to recognize the ingenuity and effort that the UTSA architecture students put into this project,” Councilman Treviño said. “We are proud to showcase their artwork in our downtown public space. Public art brings people together and strengthens connections between people and the places they share.”

In six months, the UTSA studio’s work will be removed and auctioned to local patrons by AIA San Antonio.

Funding for the project was secured through Launch UTSA, UTSA’s crowdfunding initiative. The donations of 43 donors allowed Society One Nine to purchase the materials necessary to complete MORF.

Learn more about the UTSA College of Architecture, Construction and Planning.

One San Antonio
Diverse, internationally connected and globally competitive, San Antonio has a vibrant culture and economy and is consistently ranked among the fastest-growing cities in the United States. America’s seventh-largest city offers opportunities in industries ranging from bioscience, financial services, aerospace, cybersecurity, energy and transportation manufacturing to healthcare. We are “Military City USA,” home to crucial military commands supported by a patriotic citizenry. We welcome 31 million visitors annually who inject $13.4 billion annually into our economy, and UNESCO recently designated the city’s Spanish colonial missions as a World Heritage Site. Celebrating its 300th anniversary in 2018, San Antonio is a city with a storied past and an even brighter future. For more information, visit www.sanantonio.gov.

About The University of Texas at San Antonio
The University of Texas at San Antonio (UTSA) is an emerging Tier One research institution specializing in health, energy, security, sustainability, and human and social development. With nearly 29,000 students, it is the largest university in the San Antonio metropolitan region. UTSA advances knowledge through research and discovery, teaching and learning, community engagement and public service. The university embraces multicultural traditions and serves as a center for intellectual and creative resources as well as a catalyst for socioeconomic development and the commercialization of intellectual property—for Texas, the nation and the world.