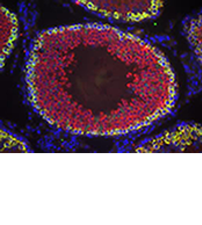 Spermatogenesis is the process of sperm production that occurs within the testes in mammals. This is a tremendously productive cell lineage, resulting in production of millions of functional sperm every day (a man produces thousands of sperm every time his heart beats). This remarkable process involves mitotic amplification of differentiating spermatogonia from a pool of spermatogonial stem cells, meiotic production of haploid germ cells, and morophological differentiation of spermatids throuh spermiogenesis. The stem cell pool is essential for this process and is maintained through balanced self-renewal and differentation to ensure adequate and sustained production of spermatogonia to meet the biological demand of sperm production. We study how spermatogonial stem cells are regulated to perform these critical biological functions.

Spermatogonial stem cells (SSCs) are adult issue stem cells capable of producing all of the germ cells in the spermatogenic lineage. Unlike pluripotent embryonic stem cells (ESCs) or induced pluripotent stem cells (iPSCs), which can produce any/all cells in the body, SSCs only contribute to male germ cell production (under most circumstances). SSCs can be manipulated ex vivo using a culture system and evaluated for their biological capacity to produce and maintain spermatogenesis using a functional transplantation assay where they are placed in the seminiferous tubules of infertile recipients and regenerate spermatogenesis. We study the fundamental processes that allow these cells to produce the spermatogenic lineage and the potential utility of these cells in the clinic.

The male germline arises from primordial germ cells (PGCs) in the embryo which migrate into the developing gonad and subsequently undergo mitotic arrest. A remarkable feature of the resulting prospermatogonia is the acquisition of an adult tissue stem cell phenotype (formation of spermatogonial stem cells - SSCs) and loss of the pluripotent phenotype characteristic of PGCs, which happens late in gestation around the time of mitotic arrest. In the postnatal mammalian testis, some prospermatogonia will become bona fide SSCs, while others contribute to the first wave of spermatogenesis, and still others undergo apoptosis and are lost. In collaboration with Dr. John McCarrey, we are studing the molecular mechanisms responsible for specification of the SSC pool during embryonic and postnatal testis development.

Spermatogonial stem cell (SSC) transplantation is an experimental technology which has the potential to be used in the clinic to preserve and restore fertility of prepubertal boys who might otherwise become sterile as a result of another treatment or disease (e.g., chemotherapy for cancer). Prior to a potentially sterilizing treatment in a prepubertal boy, surgeons would biopsy the patient's testis to obtain SSCs (poised to initiate spermatogenesis at puberty), which would subsequently be cryopreserved. Later, after cure of the underlying disease, the cryopreserved SSC could be reintroduced into the testes where they would regenerate spermatogenesis. This approach has the potential to preserve fertility for patients who currently have no other options. Click on the image above to see a cartoon depicting this hypothetical process in the clinic. We are actively studying this approach to preserve and later restore the fertility of prepubertal patients. In addition, we are exploring other non-invasive approaches to prospectively prevent the loss of fertility in boys treated for cancer.