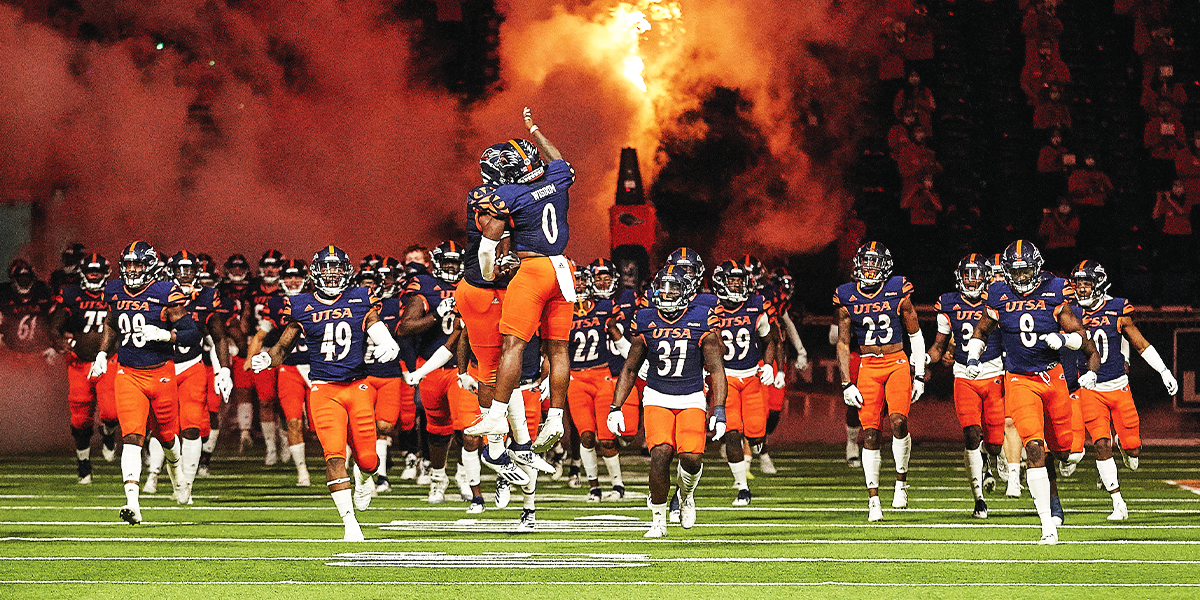 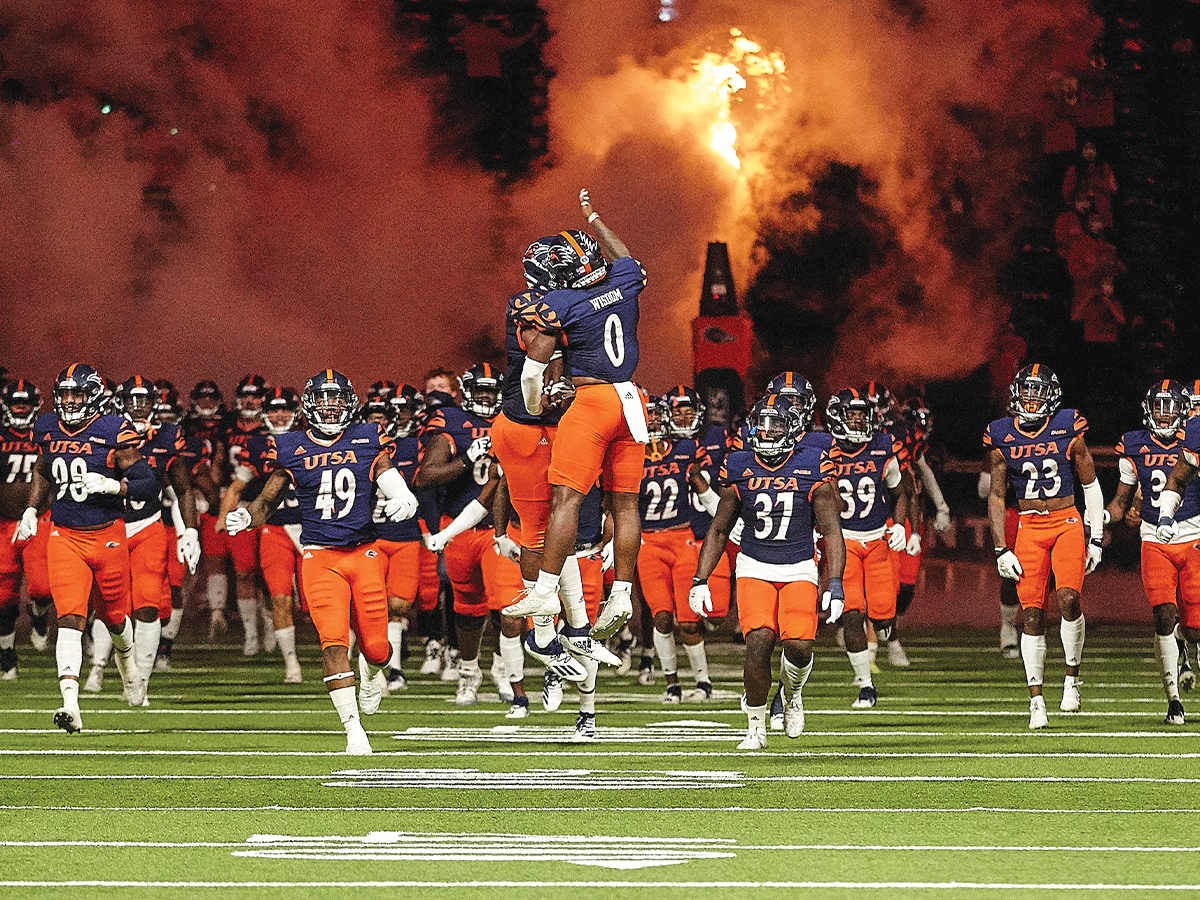 Team members weather their spring and summer in pandemic isolation, marked by unusual workouts, community fundraising, and a lot of uncertainty

When UTSA’s student-athletes were asked to stay home after Spring Break this year, strength and conditioning coach Ryan Filo sprang into action to create an individualized workout plan for every single one of them. Using the software program TeamBuildr, he and his staff built an enormous library of exercise videos that each athlete could access, adapted to make the routines as accessible as possible while they were isolating at home.

“Some athletes had access to equipment, some had limited equipment, and some didn’t have anything at all,” Filo explains, “so we filmed variations of certain workouts that could accommodate each group. You can prescribe the sets, the reps, the volumes, the intensities, and the rest periods.”

Although some weight training exercises were the same across the roster, workouts for the football team varied by position group. Wide receivers and defensive backs, for example, focus more on speed, agility and lower-body exercises than linemen, who did more variations on upper body strength training. The TeamBuildr app includes an accountability element, and Filo says the team exceeded every challenge.

“We knew a lot of people in the city were struggling with the coronavirus situation, so we wanted to give back in some way.”

“If we hadn’t been in a stay-at-home setting, our athletes would have been here at least eight hours a week doing mandatory workouts,” Filo says. “Our student-athletes were really professional about it and held themselves accountable. They kept getting the work done even if, logistically, things might have been dramatically different.”

He admits that several issues arose in the first few weeks of social distancing. A handful of athletes were struggling with nutrition while they were at the mercy of their home pantries and grocery store fare. Filo’s staff identified those athletes and provided drive-by deliveries of protein shakes. Others could not access green space for field work when nearby parks were closed, so Filo came up with workouts that could be performed in tight spaces. With only 15% of the football roster having access to a weight room or weightlifting equipment, he had to get especially clever to develop home strength training regimens.

“We got pretty creative with workouts,” Filo says. “We went as far as getting a broomstick and taping water jugs to it to mimic a barbell. You know, everybody has a backpack or a duffel bag, so you could load that up with heavy books, or utilize canned goods for shoulder workouts.”

Sophomore safety Rashad Wisdom was one of those football players lifting water jugs and using household items to achieve the best strength training possible. “I was doing anything I could to add weight during the workout and simulate weightlifting in some type of way,” he says.

Legend Status
Jeff Traylor is revered in Texas football. Now leading the Roadrunners in their 10th season, he has the same level of prestige in his sights for his new team.

Wisdom says he and his teammates willingly put in more work during the preseason than he had seen in the lead-up to his freshman season. From schoolwork, daily workouts, and film sessions to learn new offensive and defensive schemes to Tuesday and Thursday position group chats and weekly defensive meetings via Zoom, they took the initiative and passed every test of wills.

Wisdom also took the initiative to do something crucial for the community. Along with University of Texas football player Caden Sterns, Wisdom and several other former San Antonio high school standouts started a campaign to raise money for the San Antonio Food Bank. The demand for the food bank’s services were unprecedented as the coronavirus and unemployment spread through the area, so the athletes created a GoFundMe account and social media blasts to bring in donations that would help families who needed it.

“We knew a lot of people in the city were struggling with the coronavirus situation, so we wanted to give back in some way,” Wisdom says. He says his efforts to raise awareness of food insecurity will not stop anytime soon. “I know this is going to go on longer than just now—just this year.”

On the same week that Sterns and Wisdom launched the GoFundMe campaign, the community rallied around Wisdom’s younger brother, Bryce, as he celebrated his 17th birthday while fighting advanced kidney cancer. They surprised him with a drive-by parade as he sat on an orange-and-blue throne adorned with the UTSA logo. Perhaps the biggest surprise of all came when President Taylor Eighmy, Vice President for Intercollegiate Athletics Lisa Campos, and new UTSA Football Head Coach Jeff Traylor arrived—wearing masks—to deliver Bryce’s acceptance letter to UTSA.

Those thousands of folks would be devastated on July 26 when Bryce lost his battle with cancer. His death rocked the entire community at UTSA, where the Monument Lights and Student Union tower shined white in his honor just days later. “Bryce lit up our lives with his smile, positive outlook, immense fortitude, and love for his family and the Roadrunners,” Eighmy tweeted at the time. “We were so happy to give him a letter of early acceptance to UTSA. Peggy and I are thankful to have gotten to know this amazing young man.”

In an offseason marked largely by what was lost—and a football season veiled in precaution—Traylor preaches resilience to his team. He knows that every day in this pandemic will present new challenges, and his staff and players will have to roll with the punches. And even when it hurts, there’s still something good, something meaningful, that can come from times like these.