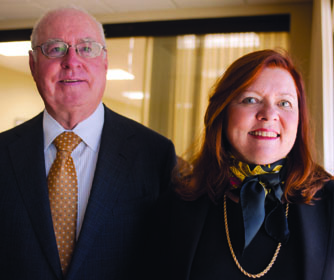 (Jan. 28, 2016) -- The University of Texas at San Antonio has received a $1 million gift from the Semmes Foundation to establish the Semmes Foundation Endowed Chair in Cell Biology. UTSA will use the gift to recruit a distinguished cell biologist to advance research efforts in brain health, opening up a host of new possibilities for treating, and preventing neurodegenerative disease.

“There is a long history of brain research at UTSA,” Perry said. “With this new chair, we’re better positioned to battle diseases of the brain.”

The position will be a part of the UTSA Neurosciences Institute, which has done vital work in studying the origin of brain diseases and looking for treatments for them, including efforts to understand the drug-addicted brain and advancements in the treatment of Parkinson’s disease. They’ve also researched how the bilingual brain works and studied how the brain responds to different kinds of learning.

Cell biology is especially important to understanding brain diseases because it is the study of the most basic parts of the cell. Neurodegenerative diseases such as Alzheimer’s and Parkinson’s are the result of abnormalities in neurons and related cells.

“Simply put, we need to understand how the cells in the brain normally function so we can understand exactly what is going wrong to lead to each type of brain disease,” Perry said.

Recently UTSA has begun to establish a group of biologists across many specialties to conduct novel “disease-in-a-dish” studies in which they work with skin cells from someone with a neurodegenerative disease. The researchers then convert these cells into stem cells and then into neurons so they can discover what has gone wrong with the neurons from each patient.

“With these novel methods, we’ll be able to diagnose, and more importantly figure out how to effectively treat, reverse or even prevent these diseases,” said John McCarrey, Professor and Robert J. Kleberg, Jr. and Helen C. Kleberg Distinguished Chair in Cellular and Molecular Biology.

“Basic scientific research is vital for the prevention and cure of diseases of the brain,” said Pat Semmes, Director of the Semmes Foundation. “We are pleased to enable UTSA to expand its team of world-class scientists and graduate students who are working toward a better understanding of neurodegenerative diseases.”