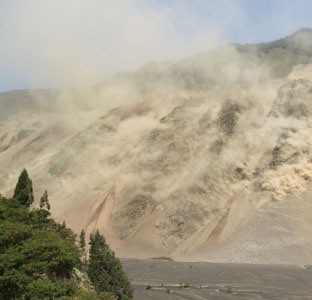 (Sept. 28, 2015) — Who knew a few plants could save a life? Jie Huang, a UTSA civil engineering assistant professor, certainly did and he is letting others know how in a new paper on preventing landslides with plants, to be published this month in the scientific journal Landslides.

“When you have rainfall, soil can start to weaken and move and that’s one of the major causes of a landslide,” Huang said.

Landslides can be tricky. While they only kill about 25 to 50 people on average every year in the United States, they cost billions annually in property damage. The problem with planning against one is that the weak layer of soil is often so far underground that it can’t be readily detected, and in some cases just one instance of rainfall can cause a landslide. A few weeks of rain in Guatemala caused 9,000 landslides in 1998.

The solution, as it turns out, is planting vegetation in the soil. Plants absorb water and reduce water infiltration that would otherwise weaken the soil and eventually cause a landslide. The recent global increase in drought has caused a lot of vegetation to die, resulting in more landslides. Replacing these landslide-halting plants is usually achieved through hydroseeding, which uses a pump to blast seeds over a surface.

What Huang is bringing to the table is a better method of creating vegetation in rocky areas or steep slopes where plants don’t usually grow well and seeds from hydroseeding don’t stick. Hydroseeding is usually spread over existing soil, not in rocky or dense areas where it would be hard for seeds to grow.

“We created a mixture of soil, fertilizer, soil conditioner, fiber, cement and a water retention agent to make the seeds stick,” he said. “This way, they’ll grow through cracks in the rock and even off a slope.”

The engineered mixture essentially is a garden and a gardener all in one. The added soil and adhesive allows the seeds to grow in unusual places, while the water retention agent removes the need for plant maintenance.

For the most part, Huang uses grass to soak up the landslide-causing moisture because it grows quicker than most plants.

“Trees would be great,” he said. “But they take years and we don’t really have that kind of time.”

This spring UTSA is hosting a 30-second film festival on TikTok! Your mission? Create a 30-second video that highlights how you relax with Adobe Creative Cloud. This is your chance to take a break from the world around you make something fun. The top three videos will receive prizes that will help you on your creative journey and the top ten winners will receive free Adobe swag!

A lecture series brought to you by Loma de Vida Spa & Wellness and UTSA College for Health, Community and Policy. Dr. Sara Oswalt is the chair of & professor in the Department of Public Health at UTSA. She is also a certified sexuality educator through the American Association of Sexuality Educators, Counselors, & Therapists.

As part of the annual Campus Race to Zero Waste, the Office of Facilities will provide sensitive document shredding services for our UTSA community. You can bring work-related or personal documents. All we ask is for you to shred away to help recycle!

In many courses, faculty broach relevant but difficult topics surrounding race, ethnicity, civil rights, and much more with sensitivity and caring—-but this may be especially difficult in an online classroom.  In this session, Dr. Shelley Howell will discuss how faculty can create an inclusive classroom environment digitally to allow for conducive conversations for all parties.

The Black Student Union of UTSA presents a panel discussion on Black women in history and the impact of prominent Black women in the Roadrunner Community.

Join this workshop to explore how this instructor designed and delivered an exemplary course with an innovative design and a student-centered approach. This workshop is focused on the use of virtual labs and interactive content using interactive tools such as PlayPosit and Softchalk for an enhanced learning experience in large classes (more than 400 students).