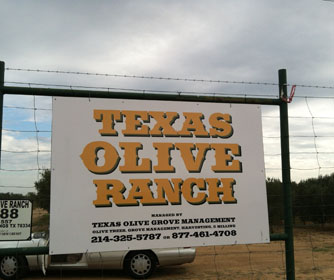 This olive ranch in Carrizo Springs is helping diversifying the town's economy.

(Nov. 16, 2015) -- In a new study published in The Journal of Regional Analysis & Policy, Thomas Tunstall, research director of the UTSA Institute for Economic Development, describes how regions affected by the oil boom in the Eagle Ford Shale can avoid becoming ghost towns after the revenues dry up.

“There may be 1,000 or more ghost towns in Texas,” Tunstall said. “We have to figure out a way to keep the communities that are still here viable.”

In his new study, Tunstall looks at several Eagle Ford Shale counties and towns whose fortunes have been made since the oil boom in the past five years. And though the area could continue producing at a high rate for years, the key to sustaining an economy in previously sleepy towns is to use that extra money to diversify the local economy. That way, when the price of oil falls or, far into the future, the oil dries up, the town remains economically stable.

“We saw what happened to Houston in the 1980s when oil prices dropped,” Tunstall said. “In a lot of cases, people were packing up and leaving. It’s completely avoidable.”

He used the example of Gonzales, Texas as a town that prospered from oil production. It has also diversified by making itself a tourist destination as the birthplace of the Texas Revolution.

“One way to do it is to look at the reason the town is there,” he said. “Sometimes a town becomes a ghost town because a highway or rail line bypassed it, or in many cases farming community became unnecessary because of the widespread mechanization of agriculture.”

Some towns in the Eagle Ford Shale have looked into becoming Free Trade Zones, allowing manufacturing companies to come in and operate without tariffs. Tunstall’s colleagues in the UTSA Institute for Economic Development also analyzed the town of Asherton, Texas that is diversifying by taking advantage of a crop that hadn’t been previously singled out as a commodity in Texas: olives. The state now produces about 54 tons per year. In 2002, it wasn’t producing any.

“Gonzales, Karnes City and Pleasanton have all done a great job of fostering economic development,” he said. “Some cities haven’t, either because their governments just aren’t in sync or they’re just disorganized. We hope that these cities take the opportunity to steward the additional tax revenue they’ve received, because nothing lasts forever.”