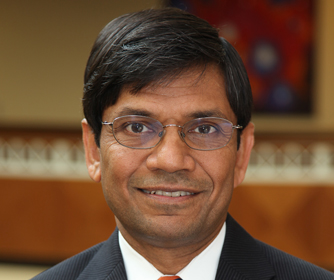 By Sarah Hada
Communications Coordinator, Office of the Vice President for Research

(Dec. 15, 2015) -- UTSA Vice President for Research C. Mauli Agrawal has been named a Fellow of the National Academy of Inventors (NAI) for his research and innovation in orthopedic and cardiovascular biomaterials and implants. The honor places Agrawal among an elite group of professionals that includes presidents and senior leaders of research universities, Nobel laureates, National Inventors Hall of Fame inductees and National Academies members.

“Tier One universities advance society through research innovation and the commercialization of groundbreaking discoveries,” said UTSA President Ricardo Romo. “I am so proud to see the National Academy of Inventors honor Dr. Agrawal for his innovation in biomedical engineering. He is a wonderful example of the world-class scholars that are propelling UTSA to Tier One status.”

Agrawal joined UTSA in 2003 and has served as the UTSA vice president for research since 2013. He also holds the Peter Flawn Professorship in Biomedical Engineering. Prior to his current role, he served as the dean for the UTSA College of Engineering. Before joining UTSA, he worked at the University of Texas Health Science Center at San Antonio (UTHSCSA) and before that, served on the faculty at Duke University. He obtained his Ph.D. from Duke University (1989), M.S. from Clemson University (1985) and a B. Tech. from IIT-Kanpur, India.

Agrawal’s research has led to many novel discoveries, and many of his patents have been licensed to commercial entities. His bioengineering research group has been responsible for the launching of three companies in San Antonio. Additionally, he has served on the editorial boards of various scientific journals including the Journal of Biomedical Materials Research, Journal of Biomedical Materials Research (Applied Biomaterials), Tissue Engineering, Journal of System of Systems (IEEE), Journal of ASTM International, and the Journal of Tissue Engineering and Regenerative Medicine.

During his career, Agrawal has been the recipient of several honors and awards, including the Chancellor’s Entrepreneurship and Innovation Award from the University of Texas System, the Healthcare Hero Award for biomedical research from the San Antonio Business Journal, and the Julio Palmaz Award for Innovation in Healthcare and the Biosciences. He has authored more than 315 scientific publications and 28 patents (14 issued and 14 pending). His latest book, a textbook on biomaterials, was published in 2014.

Additionally, Agrawal serves on the Board of Trustees of the Southwest Research Institute and as a member of Clemson University’s College of Engineering Advisory Board. He also serves on the Boards of the following local organizations: United Way’s Master’s Leadership Program, Biomed SA, Texas Research Park Foundation and the San Antonio Medical Foundation.

Election to NAI Fellow status is a high professional distinction given to academic inventors who have demonstrated a prolific spirit of innovation in creating or facilitating outstanding inventions that have made a tangible impact on quality of life, economic development, and the welfare of society.

The 168 Fellows named today bring the total number of NAI Fellows to 582, representing more than 190 prestigious research universities and governmental and non-profit research institutions. The 2015 Fellows account for more than 5,300 issued U.S. patents, bringing the collective patents held by all NAI Fellows to more than 20,000. These academic luminaries have made a significant impact to the economy through innovative discoveries, creating startup companies, and enhancing the culture of academic invention.

The NAI Fellows will be inducted on April 15, 2016, as part of the Fifth Annual Conference of the National Academy of Inventors at the United States Patent and Trademark Office (USPTO) in Alexandria, Va. USPTO Commissioner for Patents, Andrew Hirshfeld will provide the keynote address for the induction ceremony. Fellows will be presented with a special trophy, medal and rosette pin in honor of their outstanding accomplishments.

Learn more about commercialization and tech transfer at UTSA.