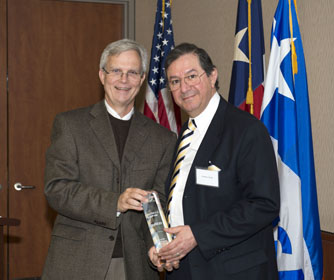 John Frederick (left), Provost and Vice President of Academic Affairs, and Arturo Ayon (right), professor of physics and Innovator of the Year.

By Sarah Hada
Communication Coordinator, Office of the Vice President for Research

(Dec. 4, 2015) -- The University of Texas at San Antonio (UTSA) recognized UTSA physics professor Arturo Ayon as its 2015 Innovator of the Year for his productivity, based on his new invention disclosures, filed patent applications, and licensing of his technology, at its third annual Innovation Awards, held today on the Main Campus. Ayon’s Surface Mounted Monitoring System detects the presence of both ordinary and excessive loads on a surface, and provides real-time or near real-time trending data.

Ayon joined UTSA in 2006 and specializes in micro devices, photovoltaics, metamaterials, sensors and materials science of thin films. He investigates the physics of materials at the micro and nanoscale level, and their potential uses in practical applications.

Additionally, UTSA recognized 17 members of its research community at its Innovation Awards ceremony. Organized by the UTSA Office of Commercialization and Innovation (OCI), these annual awards are presented in four categories, reflecting UTSA’s success at commercializing new knowledge and technologies.

“Our Office of Commercialization and Innovation is helping our faculty and students by providing resources and expertise to develop avenues to commercialize their research and inventions,” said Mauli Agrawal, UTSA vice president for research. “Ultimately, we should find ways for the public to benefit from our discoveries. Our faculty and students are true innovators. Their achievements strengthen our capabilities and solidify our reputation to be recognized as a top-tier research university.”

The OCI works with UTSA faculty to facilitate technology transfer and commercialization, and to assist with university-industry partnerships. Through the OCI, the university provides intellectual property management and licensing, proof-of-concept development, new venture incubation, entrepreneurial training, and policies and procedures that accelerate and ease the transition of intellectual property from the university to industry.

The following researchers and community leaders were recognized for their advancements in their fields:

• Arturo Ayon, Professor, Physics & Astronomy, was issued – along with Cory Hallam, director of UTSA CITE – three foreign patents in 2015 for their invention, “Surface Mounted Monitoring System.” The patents were issued in Australia, China and New Zealand, and licensed by a San Antonio company.

This category recognized the recipients of licensing revenue derived from technology that has been optioned or licensed and is generating returns for the inventors and the University.

This category recognized faculty and staff who participated in the federal I-Corps™ program, overseen by the National Science Foundation. An I-Corps™ team is awarded a $50,000 grant to evolve its research to fulfill a market need whether it’s a new therapy, invention or device. A business mentor from the local community is matched with a principal investigator (PI) and a student; these matches are facilitated by the OCI. The team is then immersed in a seven-week entrepreneurial curriculum to understand how to take the laboratory’s research to market. Teams are led by the student, with assistance with the PI and mentor who provide guidance and their network of experts and resources.

Currently, UTSA has three national I-Corps™ teams. Two teams were recognized for finishing the program in the last fiscal year. A third is finishing this month.

The Gdovin team has developed a photodynamic cancer therapy that can target cancer growth in triple negative breast cancer without attacking or destroying the healthy cells that surround it, work that has been fast-tracked as a result of the business training provided by the I-Corps™ grant.

• Michael Lasch, Research Assistant/Lab Manager. Michael has a BS in Mechanical Engineering from UTSA and is currently working on his Master’s Degree

The Feng team developed a medical suction device to clear the airways of critically injured patients without damaging other body parts. The technology, noted for its ease of use can be used in clinics or in the field. The I-Corps™ program helped them solicit input on engineering specifications from a wide range of users — emergency room doctors, military personnel, EMTs and others— to maximize the needs of the end user.

Learn more about commercialization of intellectual property and technology transfer at UTSA.