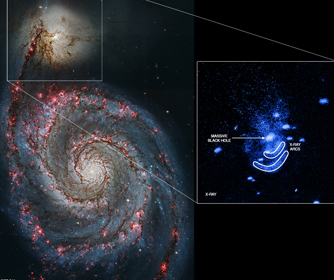 
(Jan. 5, 2016) -- A team of researchers led by Eric Schlegel, Vaughan Family Endowed Professor in Physics at The University of Texas at San Antonio (UTSA), has discovered a powerful galactic blast produced by a giant black hole about 26 million light years from Earth. The black hole is the nearest supermassive black hole to Earth that is currently undergoing such violent outbursts.

“Just as powerful storms here on Earth impact their environments, so too do the ones we see out in space,” Schlegel said. “This black hole is blasting hot gas and particles into its surroundings that must play an important role in the evolution of the galaxy.”

Schlegel and his colleagues, including Fisk University graduate student and UTSA alumna Laura Vega ’14, detected two X-ray emission arcs close to the center of NGC 5195, where the supermassive black hole is located.

“We think these arcs represent artifacts from two enormous gusts when the black hole expelled material outward into the galaxy,” said co-author Christine Jones, astrophysicist and lecturer at the Harvard-Smithsonian Center for Astrophysics (CfA). “We think this activity has had a big effect on the galactic landscape.”

Just beyond the outer arc, the researchers detected a slender region of hydrogen gas emission, suggesting that X-ray emitting gas displaced the hydrogen gas from the center of the galaxy.

Moreover, the properties of the gas around the arcs suggest that the outer arc has swept up enough material to trigger the formation of new stars. This type of phenomenon, where a black hole affects its host galaxy, is called “feedback.”

“We think that feedback keeps galaxies from becoming too large,” said co-author Marie Machacek, astrophysicist at CfA. “But at the same time, it can be responsible for how some stars form, showing that black holes can be creative, not just destructive.”

“The black hole’s behavior may be a local example of events that commonly took place when the universe was much younger. That makes this observation potentially very important,” Schlegel said.

The researchers presented their findings today at the 227th meeting of the American Astronomical Society meeting in Kissimmee, Fla. They have also described their work in a paper submitted to The Astrophysical Journal.

The touring ensemble of five London actors will perform Shakespeare’s _Macbeth in the UTSA Recital Hall.

Session for parents to learn about how to prepare for their children's future in higher education.

This September 30, the Friday Series will feature Prof. Milena Ang, who will be presenting A Tren to Nowhere: Statistic Development and the Politics of Racial, a paper co-authored with Tania Islas-Weistein where they discuss Mexico's long history of state-led development projects that contribute to economic and racial inequality. The authors argue that despite professing racial justice, official discourses surrounding the Tren Maya reproduce existing symbolic and material forms of racism.