Can Mariachi music be used to teach mathematics to third graders? 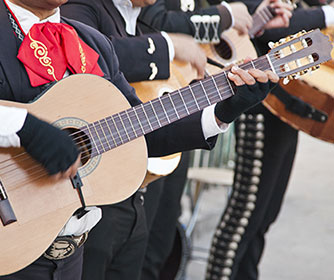 (Jan. 13, 2016) -- A new case study by Crystal A. Kalinec-Craig, assistant professor of Interdisciplinary Learning and Teaching in the UTSA College of Education and Human Development (COEHD), explores the benefits and challenges of using Mariachi music to introduce math concepts to elementary school students.

In the study, Kalinec-Craig describes her observation of a third grade math teacher in a large city in the Southwestern U.S. who introduced the concept of equivalent fractions to her primarily Hispanic students with the help of a Mariachi instructor and his students. Mariachi music originated in Mexico in the 1800s and remains popular in many communities that have ties to Mexico.

In recent years, educational scholars have studied the benefits of using music theory to help young students understand fractions. In particular, music written in a 4/4 time signature has been shown to be useful in helping young learners pick out beat patterns that make it easier for them to understand how numbers are divided. Less studied is how culturally responsive music, such as Mariachi music, can effect the learning process.

“There’s an increased interest in the educational community in connecting the lessons a young student learns in the classroom with their experiences outside of it,” said Kalinec-Craig. “We wanted to know if bridging these experiences can help students contextualize the concepts they’re learning and potentially reinforce their ties to their culture.”

Kalinec-Craig and the third grade teacher in the study chose to use Mariachi music to teach fractions because a majority of students stated at least a passing familiarity with the genre. During the lesson, the instructors and the Mariachi group framed equivalent fractions in the context of traditional Mariachi arrangements, such as “Las Mañanitas.”

The Mariachi music helped the students gain the ability to distinguish between whole numbers and fractions. It also helped them understand the relative value of fractions, such as 1/2 versus 1/4. Kalinec-Craig believes that the students better grasped the idea of fractions because the concepts were presented to them in a  way that helped the children to model their understanding of fractions while connected to their out-of-school experiences with music. In post-lesson interviews, most students reported enjoying the lesson, particularly latching onto how the songs they’d heard reminded them of home.

“Music, especially music that students are familiar or culturally connected with, can help them understand the messiness of math concepts like fractions,” Kalinec-Craig said. “Teachers have an immense educational resource at their disposal: the knowledge and experiences rooted within students’ homes and communities.”

While music can be very helpful, Kalinec-Craig cautions that teachers must be careful to refrain from creating lessons based on assumed stereotypes of their students’ demographic backgrounds. Additionally, she notes that within music theory, ideas such as variance in time signature and tempo can unnecessarily complicate the concepts being taught. She cautions teachers to keep music and mathematics lessons mainly to a 4/4 time signature since, as she observed, accidentally introducing 3/4 or other signatures can add complexities to the lesson.

Kalinec-Craig hopes to expand upon the Mariachi lesson described above. Future research could explore how other mathematics concepts can be taught through music and whether prolonged integration of arts into math lessons can help or hinder academic success.

Read “Uncovering the Mathematical Challenges and Connections When Using Mariachi Music as a Representation for Teaching Equivalent Fractions” in the latest issue of the Journal of Mathematics Education.