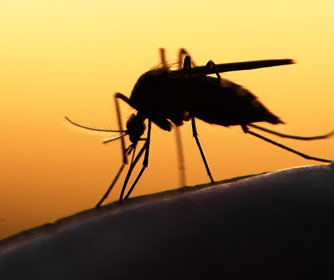 (Feb. 1, 2016) -- Kirsten Hanson, assistant professor of biology at the University of Texas at San Antonio (UTSA), is the principal investigator for a $670,000 grant from the Bill & Melinda Gates Foundation to develop novel liver-stage antimalarial treatments to stop the parasite that causes malaria before the disease is able to take hold.

Despite great progress in malaria control in recent years, close to half a million people still die annually from malaria, many of them in sub-Saharan Africa. Past efforts to eradicate the disease have been hindered by the lack of quality, affordable preventative measures in the region and because malaria, quite simply, is a very tricky disease. In the context of current efforts to eradicate malaria, new prophylactic drugs will be needed to protect people living in areas that currently have a substantial malaria burden.

“An American traveling in a place like Gabon, in West Africa, would need to take a prophylactic drug to prevent malaria,” Hanson said. “On the other hand, a Gabonese woman, who has lived there her entire life would usually have built up a degree of immunity to malaria, which would prevent her from becoming seriously ill despite being infected with the malaria parasite. If she moved away to an area with little or no disease, though, she would lose her immunity to malaria.”

Losing that immunity can be catastrophic. After a massive and initially successful push to eliminate malaria in Madagascar, for instance, most people lost their natural resistance to the disease. But malaria was not completely wiped out on the island nation, and it came back with a vengeance in the 1980s, causing tens of thousands of deaths.

“On the path to eradication, we will need new tools, including medicines that can be taken prophylactically to protect people from malaria ” she said.

Hanson’s top-tier research focuses on the liver stage of the malaria parasite, lifecycle, which is absolutely essential for the parasite, but causes no disease at all. After a person is infected through a mosquito bite, the parasite travels to the liver, where it multiplies rapidly and then proceeds to infect the blood.

“If we can target the parasites before they reach the blood, then people would not become ill with malaria, and they wouldn’t be able to transmit the disease,” she said. “Additionally, if we can find compounds that kill the parasite as late as possible in its development in the liver, we may be able to harness these “failed” liver stages to provide some immune protection against future encounters with the parasite.”

Hanson’s BMGF grant will support her group’s efforts to find these types of antimalarial compounds, working in collaboration with the Center for Innovative Drug Discovery at UTSA and the UT Health and Science Center. The new grant was awarded as part of the Foundation’s Grand Challenges Explorations program, which issues specific challenges to solicit and fund key advances in preventing, treating and curing diseases of the developing world.

Learn more about the Bill and Melinda Gates Foundation.

Learn more about the Center for Innovative Drug Discovery.