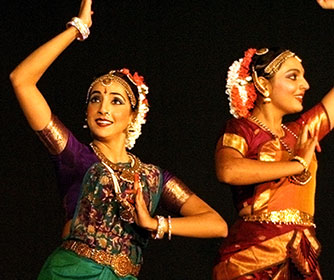 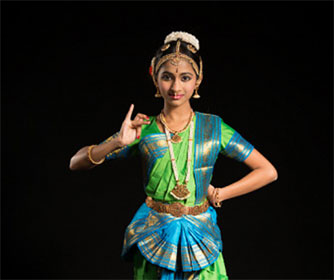 (March 31, 2016) -- Kalpana Iyengar, a lecturer with the UTSA Department of Interdisciplinary Learning and Teaching and researcher with the San Antonio Writing Project (SAWP), explores the use of classic Indian dance to teach geometry and other math concepts to Asian Indian-American schoolchildren in a recent study published in the Journal of Fine and Art Studio.

“For so long, dance has been regarded as solely an aesthetic experience, an entertaining work of art,” Iyengar said. “But history demonstrates that dance can be useful beyond that. In this case, I wanted to see how culturally relevant dance could help Asian Indian students better grasp basic shapes and learn concepts common to both mathematics and dance.”

Iyengar studied the idea using classical Indian dance known as Bharatanatyam, which is often characterized by its use of stylized, schematic body movements and sculpture-like poses. Bharatanatyam dancers use poses and movement to convey ancient Indian stories from the Hindu epics Ramayana and Mahabharata.

In recent years, Bharatanatyam has become popular among Asian Indian-American families as a medium for children to connect to their cultural heritage and roots. Iyengar was inspired to pursue the research after watching her daughterGowri practice Bharatanatyam at a local performing arts center.

“Bharatanatyam dancers often create basic geometric shapes – like the line, square, rectangle or triangle – with their bodies to tell their stories,” Iyengar said. “After all, these basic shapes have long been how we visually represent the world around us. The repetition of these shapes helps cement the elements of geometry in our minds.”

Over the course of a few months, Iyengar worked with Asian Indian-American students of various school ages in three major cities in the Southwestern U.S. Some students had first-hand knowledge of Bharatanatyam; others had none. Each participant was shown Bharatanatyam performances, such as Savitha Shastry’s “Bharatanatyam Jathi,” and instructed to answer several questions relating to geometry, their experience and the performances themselves.

“I found that students were more readily comprehending the lessons when they learned them through a lens that is familiar and contextual to their home cultures,” Iyengar said. “The cultural aspect of this dance meant that they were more likely to be engaged and thus be more receptive to the lessons.”

Iyengar found that the children were drawn to the Bharatanatyam performances and were eager to name the shapes they saw during the performance. According to her, the older students more easily connected the commonalities between the mathematics concepts and the dances.

“I would like to conduct a similar study with a larger and more demographically diverse student population,” Iyengar said. “I also want to see whether this trend of student engagement is observable in other Western dance styles, such as ballet and hip hop.”

“I believe that, as educators in an increasingly multicultural society, it is important that we provide diverse students with opportunities to engage with their cultures and heritage,” Iyengar said. “The effects of such approaches can only be positive and beneficial to children’s psychological well-being.”

Iyengar is the founder and co-director of the Kahani Project, an annual event that SAWP hosts with the India Association of San Antonio. Now in its ninth year, the Kahani Project is designed to give Asian Indian students, aged from elementary to high school, an opportunity to write about their cultural heritage in public spaces. In 2015, she and faculty with COEHD helped create an affiliate of the San Antonio Writing Project in India titled the Haridwar Writing Porject.

“Bharatanatyam and Mathematics: Teaching Geometry Through Dance” was published in the Journal of Fine and Studio Art, Vol. 5(2) pp. 6-17.

Dr. Kasandra Keeling will perform a one-hour recital on piano. More details to come. The Fall 2021 concert schedule is subject to monitor our website and social media for updates. This concert will be live-streamed via the UTSA Music Facebook page. https://www.facebook.com/UTSAMusic