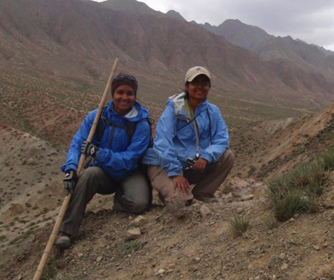 Marina Suarez with her sister, Celina, in northwest China.

(March 8, 2016) -- Marina Suarez, assistant professor of geology at The University of Texas at San Antonio (UTSA), has received a National Science Foundation Faculty Early Career Development (CAREER) Award. It includes a $478,000 grant to support her top-tier research in paleoclimatology.

Suarez’s passion since childhood has been dinosaurs. In 2011, a new species of dinosaur, Geminiraptor suarezarum, was named after her because she discovered it at a site in Utah with her twin sister and fellow paleontologist, Celina Suarez. The animal lived 100 million years ago during the Cretaceous period, a critical time in Earth’s history.

“The Cretaceous Period is really cool because it was this big transition from an archaic terrestrial ecosystem to something more modern,” she said. “During this time, we had more diversification in flowering plants, which had never been seen before. Then we started to get birds and more modern mammals. It was a really important time for life.”

During the Cretaceous, many of the dinosaurs seen in the Jurassic Park films were roaming the Earth. There wasn’t any ice on the Earth’s poles, and submarine volcanic eruptions caused dramatic climate fluctuations.

“What I’m really interested in is how the climate has changed, and how the Earth functions with high levels of carbon dioxide,” Suarez said. “I’m also going to get into how the Earth comes back to equilibrium from these extreme conditions, and how that effects life.”

The period also saw the planet’s climate fluctuating between wet and dry conditions. This led to the formation of isolated environments that Suarez calls “genetic islands,” wherein new species of plants and animals formed in very specific conditions.

“For plants, temperature and precipitation are very important,” Suarez said.

She plans to study Cretaceous rocks in Utah, China, Spain and Texas. Many of the rocks found in San Antonio are from the same period.

“These fossil soils are fascinating because there’s an interaction of many different processes,” she said. “If you can understand them, you can work back toward understanding the climate of the Earth millions of years ago.”

Suarez also hopes her research will impact current studies on climate change, an issue of considerable concern to world leaders.

“If you want to know how the Earth is going to function in these more extreme conditions, we need to know how the climate has behaved in the past,” she said. “You really have to go millions of years back in time.”

Learn more about the UTSA Department of Geological Sciences.

A two-hour virtual workshop by UTSA faculty on the Texas Essential Knowledge and Skills for African American studies programs.