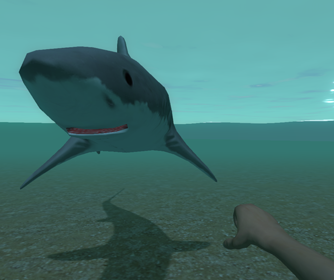 (April 14, 2016) -- John Quarles, an associate professor of computer science at The University of Texas at San Antonio (UTSA), has developed a new virtual reality method of aquatic physical therapy. Quarles’s game, “Shark Punch,” was made with everyday items like smart phones and dive masks and is as therapeutic as it is entertaining.

“I’d been considering the idea of an aquatic game for a while,” said Quarles, who has multiple sclerosis. “In rehabilitation, there aren’t really any virtual reality games you can play in the pool.”

Like many people with multiple sclerosis, Quarles gets overheated while exercising and that makes his symptoms worse. Exercising in the pool keeps his temperature down and helps him balance.

For the past year, Quarles has been developing and testing the game, which involves strapping a waterproof smart phone to the user’s chest. A second phone attached to a dive mask allows the user to explore a virtual underwater reality.

The goal of the game is to must evade and fend off a virtual great white shark by trying to punch it on the nose. The phone attached to the user’s chest detects when he throws a punch. It gives off a chomping noise and a little buzz if the shark is able to get a bite.

Quarles made sure the experience felt as real as possible. When the user looks through the goggles at the smart phone screen, the image mimics the experience of looking through a dive mask by splitting the screen. When he goes to punch the shark, a fist is seen flying across the screen.

“Virtual reality has existed for some time in physical therapy,” said Quarles. “Aquatic therapy has been a part of treatment for MS for a long time as well, but no one had merged the two yet.”

Earlier this year, Quarles applied for a patent for Shark Punch. In the meantime he will test the device on other MS patients so he can improve it. He hopes the game can also be adapted to help people seeking out aquatic therapy to cope with injuries or recovery from surgery.

“The idea is to think outside of the box when it comes to virtual reality gaming,” he said. “Games can have a positive effect on people’s lives, and that’s what we’re striving for.”

Learn more about the UTSA Department of Computer Science.