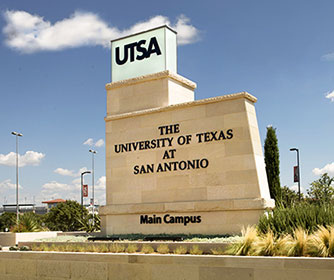 Times Higher Education ranks UTSA No. 4 in U.S., No. 77 globally

(April 7, 2016) -- UTSA has been ranked as one of the best young universities in the nation, as well as a global leader, according to the 150 Under 50 Rankings released by Times Higher Education (THE).

UTSA is listed No. 4 in the United States and No. 77 internationally in the annual rankings, which assess universities less than 50 years old. The rankings are based on excellence in teaching, research, citations, international outlook and economic contributions. Only 150 universities globally are selected for recognition.

Times Higher Education’s World University Rankings are considered one of the most widely respected measures of university excellence.

In addition to UTSA, just four other U.S. universities made this year’s 150 Under 50 list. They are Rush University, UT-Dallas, George Mason University and the University of Maryland, Baltimore County.

“This ranking is forever looking forward,” said Paul Baty, editor of the THE World University Rankings. “Now in its fifth year, it was designed to celebrate the achievements of young institutions that have made a big impact on the world stage in years rather than centuries, and to highlight future rising stars, or as economist Andrew Oswald described them: ‘The likely future Harvards or Berkeleys.’”

"Times Higher Education’s annual rankings are meaningful and highly regarded by the international community,” said UTSA President Ricardo Romo. “To see UTSA recognized as one of the best young universities in the nation, and among the best in the world, is a tremendous accomplishment. This is validation that UTSA is competitive on a global scale and its top-tier work is making a positive and lasting impact on society.”

As in years past, UTSA scored particularly well in THE’s citation category, a metric designed to quantify the creation of knowledge through research influence. To measure success in citations, THE examined more than 51 million citations to 11.3 million journal articles published around the world between 2010 and 2014. Citations to these papers were also evaluated.