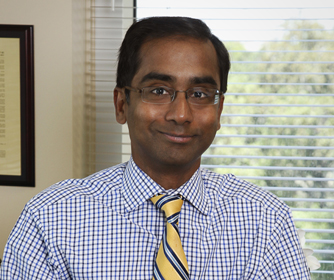 (May 11, 2016) -- University of Texas at San Antonio (UTSA) President Ricardo Romo has named Bernard Arulanandam as the interim vice president for research, effective June 1. For the past four years, Arulanandam has served as UTSA’s assistant vice president for research support. He also serves as the director of the university’s South Texas Center for Emerging Infectious Diseases (STCEID) and the Jane and Roland Blumberg Professor in Bioscience.

“As both a microbiologist and assistant vice president for research support, Dr. Arulanandam understands the importance of developing and sustaining successful research programs,” said UTSA President Ricardo Romo. “His expertise in research administration, his knowledge of commercialization and his passion to see UTSA become a Tier One research institution make him an excellent choice to lead UTSA through this interim period.”

Arulanandam joined the UTSA faculty in 2001. Since that time, he has focused most of his research on the disease cycles of two bacteria: Franciscella tularensis, which causes the respiratory infection tularemia, and Chlamydia trachomatis, which causes the sexually transmitted disease chlamydia.

He also serves as the scientific director of the San Antonio Vaccine Development Center, a partnership between UTSA, the UT Health Science Center, Southwest Research Institute and Texas Biomed, and as director of the Center of Excellence in Infection Genomics, which supports microbiology research, teaching and outreach activities aligned with Army priorities.

Arulanandam, a fellow of the American Association for the Advancement of Science, obtained his bachelor’s in toxicology and master’s in microbiology from Minnesota State University, his Ph.D. in microbiology and immunology from the Medical College of Ohio and an M.B.A. at UTSA.