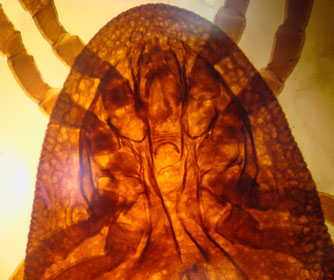 A close-up of a tick, one of the most common carriers of Lyme disease.

(May 9, 2016) -- Medication that is normally used to lower cholesterol could stop the spread of Lyme disease, according to a new study co-authored by Janakiram Seshu, associate professor of biology at The University of Texas at San Antonio (UTSA).

“Roughly 300,000 cases of Lyme disease are estimated to occur in the US by the Centers for Disease Control and Prevention every year,” Seshu said. “One of the questions we’re asking is how Lyme disease can be stopped before it’s transmitted from ticks to humans.”

Seshu and his team have discovered that statins, medications usually used to lower cholesterol, can reduce the burden in mice and can therefore be exploited to reduce the number of Lyme disease bacteria acquired by the feeding ticks. These investigators believe that this could be one of the many strategies to lower the incidence of Lyme disease by restricting bacterial survival at its source.

Seshu noted that these studies are based on experimental models of Lyme disease infection and more work needs to be done to determine how effective statins could be in blocking the natural life cycle of this pathogen.

While the use of statins doesn’t spell a complete elimination of Lyme disease, it has the potential to drastically reduce the number of new cases. Now Seshu and his UTSA graduate students are working to better understand how statins can be modified to primarily affect the survival of Lyme disease bacteria.

“First we want to determine how statins can be used to stop the growth of the pathogen and how we can exploit these findings to our benefit,” Seshu said. “Our hope is that if we reduce the number of viable organisms in infected reservoir hosts then we can block the transmission to a point that the disease doesn’t affect humans significantly in many areas of the US.”