UTSA contributes to UT System's No. 4 ranking for most U.S. patents granted 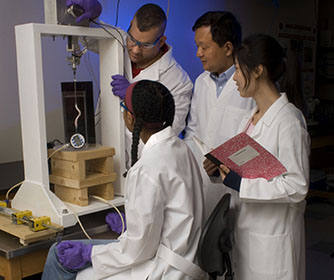 The report, which is published by the National Academy of Inventors (NAI) and Intellectual Property Owners Association (IPO), analyzes data acquired from the U.S. Patent and Trademark Office to highlight the important role patents play in university research and innovation.

"Patents are key building blocks of UTSA's growing innovation ecosystem," said Christine Burke, director of the UTSA Office of Commercialization and Innovation. "The university's investment in them allows these innovations to be transferred into startups and companies, and developed into commercial products that can help society."

One of UTSA's patents, No. 9,173,562, was for technology developed by Andrew Tsin and Dhiraj Sardar, biology and physics professors, respectively. Tsin and Sardar devised a method to detect progressive eye diseases from an early stage and track them non-invasively and quantitatively. The technology applies to diseases such as diabetic retinopathy, which affects up to 80 percent of all patients who have had diabetes for 20 years or more, and wet macular degeneration, which affects mostly those over the age of 65. The researchers' method uses the intensity and polarization shifts of scattered light to find anomalies.

Other UTSA patents issued in 2015 include:

In 2015, UT System researchers were granted 191 patents from the U.S. Patent and Trademark Office. UTSA received nine of those patents and filed an additional 69 patent applications.

UTSA's patents and patent applications are managed by the Office of Commercialization and Innovation (OCI), which oversees the university's portfolio of intellectual property, engages companies in research and commercialization partnerships, and provides intellectual property education and training. The OCI also helps bridge the gap between basic research and applied innovation by operating a proof-of-concept fund, supporting commercialization development programs such as the NSF I-Corps™ and promoting entrepreneurship through the UTSA New Venture Incubator.

The NAI and IPO's worldwide rankings are compiled by calculating the number of utility patents granted by the U.S. Patent and Trademark Office, which lists a university as the first assignee on the printed patent.

The challenges and opportunities presented by the pandemic have inspired creative solutions for artists and arts organizations here in San Antonio and around the world. Our expert panel will discuss how artists and educators are adapting the ways in which they present, perform and teach music and visual arts in a time when we are unable to gather together.

The Research Recovery Town Hall will focus on the reopening plans as recommended by the UTSA Research Excellence & Doctoral Education Recovery tactical team.