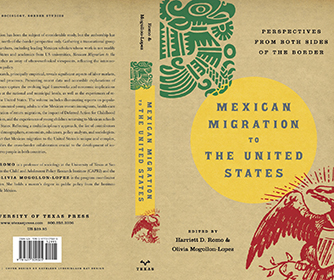 (July 19, 2016) -- Scholars from Mexico and the United States share their analysis of immigration trends and policy in a new book, Mexican Migration to the United States: Perspectives from Both Sides of the Border.

Harriett Romo, professor of sociology and director of The University of Texas at San Antonio (UTSA) Mexico Center, edited the book along with the center’s program coordinator Olivia Mogollon.

The two have been working on the book since 2012, when the UTSA Mexico Center organized a large conference that brought together prominent American and Mexican scholars from different disciplines such as anthropology, sociology and history.

That conference triggered a dialogue about migration, helped nurture relationships and created new ones between scholars in the United States and Mexico. That collaboration between scholars is showcased in the book.

“For this challenging and very complicated topic having perspectives from different actors, different points of view and different countries allows you to have a better understanding,” said Mogollon.

Last month, Romo and Mogollon went to Mexico with a UTSA delegation. While there, they held two book presentations at El Colegio de México and the Center for Research and Advanced Studies in Social Anthropology (CIESAS). They say those events sparked more dialogue about migration that will continue in the future.

“I strongly feel like we’re never going to get a good immigration policy unless we have dialogue across borders and try to work out something that is compatible with our neighbors,” said Romo.

The UTSA Mexico Center will host a panel discussion and book signing on Friday, September 23, 2016, from 6 to 7:30 p.m., at the UTSA Institute of Texan Cultures.

Learn more about the book Mexican Migration to the United States: Perspectives from Both Sides of the Border.