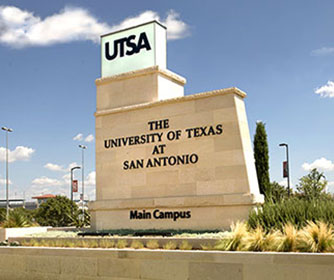 Ender Finol and students in his UTSA laboratory work on a model of an aneurysm.

(Aug. 1, 2016) -- Ender Finol, associate professor of biomedical engineering at The University of Texas at San Antonio (UTSA), has been honored with the American Heart Association’s Collaborative Sciences Award. The award includes a $750,000 grant to continue his aneurysm research, which involves “freezing” aortic aneurysms before they burst and cause serious damage.

An aneurysm can be a time bomb, medically speaking, since people don’t know they have one until either a doctor detects it or it ruptures. In the latter case, there’s about an 80 percent fatality rate. If it’s caught in time, doctors will generally observe the aneurysm until it grows to about 5 cm in diameter, which requires surgery to give the blood vessels relief from the pressure.

“The status quo is that you can’t stop the growth of an aneurysm, so checking in until it’s time to intervene surgically is the only option for many people,” Finol said.

Just last year, Finol received a $1.8 million grant from the National Institutes of Health to support his research in predicting when aneurysms will need surgery by thoroughly mapping them with magnetic resonance images. Now, Finol is taking that research a step further by joining forces with Dan Simionescu, associate professor of bioengineering at Clemson University and Satish Muluk, system director of vascular surgery at the Allegheny Health Network.

The trio of researchers are using a chemical compound, pentagalloyl glucose, to “freeze” aneurysms in the aorta once they’ve been detected.

“The compound binds to two proteins in the aorta called elastin and collagen and stabilizes the artery by keeping the aneurysm from growing,” Finol said. “The aorta remains stable and we hope its biomechanical environment is also stabilized.”

Finol is now beginning work with Simionescu and Muluk as well as Eugene Sprague, Geoffrey Clark and Beth Goins, all faculty at The University of Texas Health Science Center at San Antonio, to find a way to apply the chemical non-invasively to human subjects. For now, this award will support a 3-year animal trial.

Like Finol’s previous work to prevent unnecessary aortic surgery that could be costing lives, he hopes his research will pave the way for a new approach to aneurysm treatment.

“It’s a serious medical problem that requires an innovative, elegant approach,” he said. “As engineers, we can make a difference.”

Learn more about the UTSA Department of Biomedical Engineering.