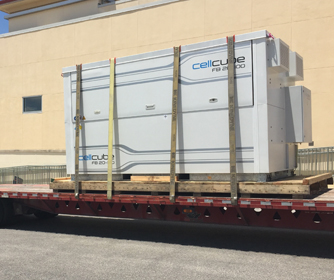 This massive flow battery will be at the center of UTSA-led research on the viability of flow batteries in powering the internet.


(Aug. 15, 2016) -- The future of renewable energy will rely on many different kinds of technologies. But one technology is primed to play a bigger role. New research, announced yesterday at The University of Texas at San Antonio’s (UTSA) Texas Sustainable Energy Research Institute (TSERI) indicates that batteries can help ease the transition to a grid increasingly powered by renewables.

Billed as the “Next-Gen Energy Storage Research Announcement,” senior leaders from Microsoft, power production giant NRG Energy, and various utility players converged on UTSA to discuss the role batteries can play as more renewable energy comes onto the grid. The research reveals new information about power efficiencies at different currents and how to operate batteries at scale. The research program, begun in spring 2016 and designed to continue until at least the spring of 2017, is looking at the performance and economic potential of flow battery technology in a variety of applications, from powering data centers to optimizing electric distribution grids.

“Our research to date has focused primarily on two critical questions – how well do flow batteries perform and what is their revenue potential if used at scale to provide ancillary services to the power grid,” said Dwain Rogers, Research Director at the Texas Sustainable Energy Research Institute. “Initial testing is already unlocking potential strategies to participate in power markets when the flow battery is not in use for its primary application. This sort of world-class research aligns perfectly with UTSA’s drive to become a Tier One research university.”

Renewable energy made up 58% of all new generation additions in the world last year, but renewables still only account for 22% of total electricity generation in the world. This means there is a great deal of opportunity to grow the percentage of renewables on the grid – but there are also new challenges related to energy storage that need to be addressed.

With traditional sources of electricity, energy is stored in a lump of coal, a reservoir behind a hydroelectric dam, or in a fissionable isotope. It can be stored indefinitely and deployed to meet demand as needed. However, wind and solar generation resources only provide electricity when the wind blows or the sun shines. The lack of existing large-scale storage for energy produced from these resources requires innovation in the way each can be effectively integrated into the grid at high rates of penetration.

This challenge is precisely what is driving the research at the UTSA’s Texas Sustainable Energy Research Institute. Distributed generation technologies, including batteries, have the potential to reduce energy losses, improve reliability and minimize the need for costly investments in new infrastructure. Those benefits are attractive to companies like Microsoft, with large and growing energy needs to power their datacenters, as well as power companies like NRG, that are working to make the grid more reliable while also deploying more sustainable forms of energy generation, including renewables.

“With more than 100 datacenters in more than 40 countries around the world, energy matters a lot to Microsoft. The news today shows great promise in identifying and refining technologies that can reduce energy consumption and improve efficiency within our datacenters, while also contributing to a more reliable and sustainable grid,” said Jim Hanna, Director for Datacenter Sustainability at Microsoft. “We’re pleased to see the early results and amount of progress that’s been made, and excited about the future of this work.”

Lynda Clemmons, Vice President from NRG’s Business Solutions Group echoed the need to innovate for reliability. “Our customers today are interested in the long-term sustainability benefits of renewable system solutions which are increasingly including storage. Whether datacenters, hospitals, universities or any facility with a mission critical function, there is a direct benefit from dynamic technologies that can help ensure customers meet both sustainablity goals and reliability needs.”

The research announced at the event is part of the three-year agreement between UTSA and Microsoft to research and develop sustainable technologies to make datacenters more energy efficiency and economically viable, first announced in April 2014. In addition to this work, Microsoft recently announced new commitments towards greening their datacenters, including purchasing more renewable energy and investing in new energy technologies to drive efficiencies.