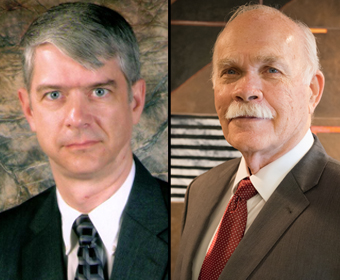 
(Aug. 23, 2016) -- Two professors from The University of Texas at San Antonio (UTSA) are are set to be inducted into the Inaugural San Antonio Cyber Hall of Honor on Tuesday, August 23. Gregory White, professor of computer science and director of the UTSA Center for Infrastructure Assurance and Security (CIAS), and Glenn Dietrich, professor of Information Systems and Cyber Security, will be part of the first class of leaders and pioneers in the cybersecurity industry in San Antonio.

The class will be officially inducted on Tuesday, August 23 at the Henry B. Gonzalez Convention Center in conjunction with The CyberTexas Foundation.

White also serves as the Executive Director of the Information Sharing and Analysis Organization Standards Organization (ISAO SO). The ISAO SO, led by UTSA, was created in response to President Executive Order 13691 to create standards and guidelines to improve the cybersecurity posture of the nation.

Dietrich was a co-founder and the first director of the CIAS, and also helped to develop the information assurance program in the UTSA College of Business. He has been instrumental in developing minors in technology management, digital forensics and data center and network management. He is the lead researcher for UTSA’s Cyber P3 Initiative, which works to train army reservists to fill critical cybersecurity positions with the federal government.