Meet a Roadrunner: Lilian Cano is preparing the next generation of Spanish heritage professionals 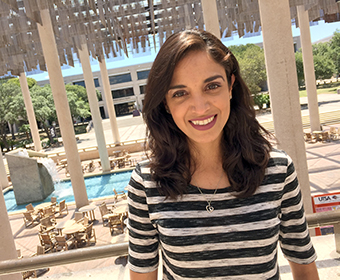 (Aug. 29, 2016) -- Meet Lilian Cano. The UTSA graduate and lecturer in the Department of Modern Languages and Literatures is preparing the next generation of Spanish heritage students to excel in a competitive bilingual workforce.

A native of Monterrey, Mexico, Cano graduated from John Marshall High School in San Antonio, where she moved with her family when she was nine years old. She graduated in the top 10 percent of her class, which qualified her to attend any college of her choice in Texas. Cano chose UTSA.

"We are immigrants and we didn't have relatives anywhere else in the country," Cano said. "People thought I was crazy, but I didn't want to live farther from my family, and San Antonio is my home."

Cano earned her undergraduate and graduate degrees in Spanish from UTSA, and began working as a teacher assistant for her alma mater during her graduate program. She is now a full-time lecturer, teaching beginning, intermediate and advanced Spanish courses.

Cano helped start a study abroad program, where students travel to Costa Rica to practice Spanish for a summer. Most recently, she and another colleague developed a course for Spanish heritage students - those who have grown up in a Spanish-speaking home but did not formally study the language in elementary or secondary school.

"The way we teach a non-native speaker is very different to how we teach Spanish heritage students," Cano said. "A non-native student will learn the language from scratch. Imagine a student coming from China to learn English? It's the same. They have to learn structure, vocabulary; we make comparisons with English sometimes to note the differences and similarities."

Spanish heritage students already have an advanced command of the language, Cano said. Studying advanced classes in Spanish allows them to dig into the historical and cultural perspective of literature and linguistics of the Spanish-speaking world. They also analyze and conduct rhetorical and linguistics research, the way anyone studying an English major would.

UTSA is a Hispanic-serving institution and ranked seventh in the nation awarding undergraduate and graduate degrees to Hispanic students, according to Hispanic Outlook in Higher Education.

"San Antonio has an FBI bureau and they are always looking for Spanish speakers; they come to recruit in my class," Cano said. "And it's not just the FBI. The police and health care companies are also recruiting more bilingual professionals than ever before."