UTSA signs agreement with Japan to collaborate on astronomy 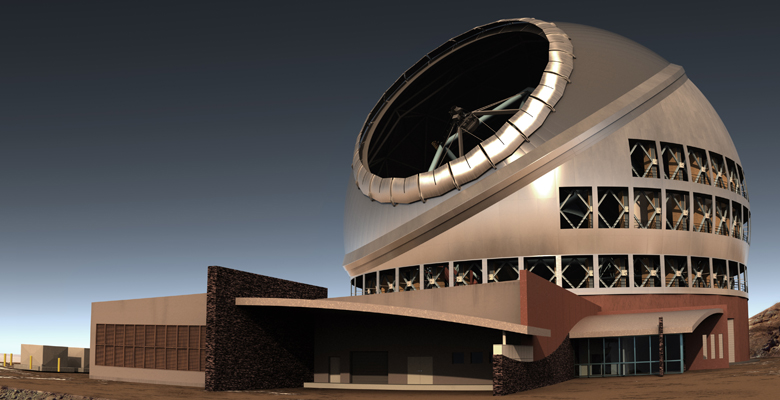 An artist's rendering of the Thirty Meter Telescope. Courtesy of The TMT International Observatory.


(Nov. 11, 2016) -- Today The University of Texas at San Antonio (UTSA) and The National Astronomical Observatory of Japan (NAOJ) signed an agreement to collaborate in all aspects of astronomy, including the planned Thirty Meter Telescope.

“This agreement will help strengthen relations between the U.S. and Japan, by encouraging the exchange and collaboration of scientific and technological knowledge. It’s with a partnership like this that UTSA makes significant progress in reaching our internal goal of becoming a Tier One research university,” said UTSA President Ricardo Romo.

In addition to President Romo, the signing was attended by NAOJ Director Masahiko Hayashi, Congressman Joaquin Castro, Consul-General of Japan in Houston Tetsuro Amano and Hiroshi Karoji, professor of astronomy at Princeton University.

Chris Packham, associate professor of astronomy at UTSA, is leading a team of American and Japanese scientists in building instruments for the telescope, which is planned to be one of the largest ever built.

“I’ve been collaborating with my fellow astronomers in Japan for 20 years,” he said. “It’s one of the leading nations in astronomy and the new telescope is an historic project. I’m thrilled to be a part of it.”

The telescope’s proposed massive mirror, which is designed to be 30 meters wide, will enable it to see much farther than current ground-based telescopes, the largest of which possess mirrors roughly 10 meters across. The mirror is designed to allow astronomers to view the furthest reaches of space to address questions concerning the origin of the universe, peer into the centers of black holes in distant galaxies and examine the atmospheres of exoplanets.

The project, which is a collaboration between the United States, Japan, Canada, China and India, is expected to be completed in the next 10 years.

Another aspect of the partnership will be an exchange of scientists and graduate students between Tokyo and San Antonio to further internationalize UTSA’s diverse campus. Packham is already hosting scientists from the NAOJ to participate in top-tier research efforts at UTSA.

“Today represents a huge step forwards in a multi-year project, which we expect to help put UTSA astronomy on a strongly rising profile,” Packham said. “Astronomy is a highly internationalized enterprise, it’s always moving to see so much support and collaboration among nations to answer such profound astronomical questions.”

Congressman Castro is the co-chair of the U.S.-Japan Caucus, which aims to facilitate bilateral collaboration on issues of common interest between the two nations, including technological development.

“I congratulate everyone here in San Antonio and Japan who made this achievement possible,” Castro said. “And I applaud the work UTSA has continued to do on a national scale.”

Learn more about the National Astronomical Observatory of Japan.

Show us what UTSA Spirit, Pride, and Tradition look like in your physical office or virtual office by participating in this year’s Window Wars! Judging will take place Thursday, October 14 between 8:00 am – 5:00 pm.

UTSA Student Activities is hosting an event at the Downtown Campus during the week of homecoming. Homecoming Blitz is your traditional spirited event that takes place during UTSA’s Homecoming week of events. Join us for activities, food, and get ready for the homecoming game.

Join the UTSA Soccer team as they face off Louisian Tech. Kickoff is at 7 p.m.

Roadrunners can grab a few laughs with a special comedy performance from Chico Bean, Darren Brand, and Billy Sorrells! These comedians are best known for their frequent appearances on MTV’s Wild 'N Out! The doors open at 7:00 pm and showtime is 8:00 pm. The show is open to UTSA students only and seating is limited.

Join UTSA Soccer as they are off to the best start in program history with a record of (6-4-1). Transportation from Campus to Park West will be provided for this game. Park West is just a short 5-minute drive from UTSA Main Campus. Admission and parking are free for everyone!

Dr. Yoojin Muhn directs the choir in this concert. More details to come. The Fall 2021 concert schedule is subject to change. Please continue to monitor our website and social media for updates.This concert will be live-streamed via the UTSA Music Facebook page. https://www.facebook.com/UTSAMusic