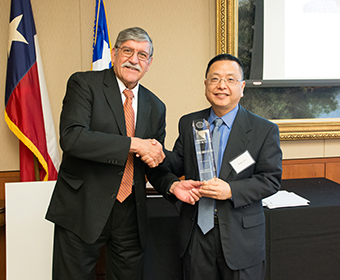 
(December 8, 2016) – The University of Texas at San Antonio (UTSA) recognized professor Banglin Chen as its 2016 Innovator of the Year at the fourth annual UTSA Innovation Awards. His selection was based on a number of factors including productivity, new invention disclosures, filed patent applications (three in 2016), and licensing of his technologies.

Chen earned his B.S. and M.S. in Chemistry from Zhejiang University, China and his Ph.D. in Inorganic Chemistry from the National University of Singapore. His research focuses on metal-organic frameworks (MOFs), which are three-dimensional structures, made up of metals linked to carbon compounds. These MOFS are useful for alternative energy applications, particularly for storage and separation of gases such as acetylene, hydrogen and methane.

Additionally, UTSA recognized 15 other members of its research community. Organized by the UTSA Office of Commercialization and Innovation (OCI), these annual awards are presented in four categories, reflecting UTSA's success at commercializing new knowledge and technologies.

"In our role as a researcher, we can be so involved in the pursuit of discovery that sometimes we don't realize our findings need to resonate and benefit the public in a tangible way. The OCI provides our faculty and students resources and expertise to commercialize their research and inventions. Their innovations add to our reputation as a top-tier research university," said Bernard Arulanandam, interim UTSA vice president for research.

The OCI works with UTSA faculty to facilitate technology transfer and commercialization, and to assist with university-industry partnerships. Through the OCI, the university provides intellectual property management and licensing, proof-of-concept development, new venture incubation, entrepreneurial training, and policies and procedures that accelerate and ease the transition of intellectual property from the university to industry.

"We've built a foundation over the last few years. We now call upon the San Antonio community to engage with our office and our researchers to lend their expertise to convert groundbreaking research into finished products and companies. Organizing these awards not only demonstrates our accomplishments but allows us to find opportunities for collaboration with our community stakeholders, and ultimately drive our economy," said Cory Hallam, UTSA chief commercialization officer.

The following researchers and community leaders were recognized for their advancements in their fields:

Recipients of Issued Patents
Issued patents represent the securing of intellectual property rights for new innovations. This year, UTSA received a record number of issued patents, which grow our licensing portfolio and contribute to UTSA's state, national, and international rankings.

Mauli Agrawal | 9,259,334 | United States, Australia
Scaffold System for Tissue Repair
>> An expandable scaffold that serves as a temporary template that allows damage tissue to be rebuilt.

Bao Liu | 9,181,089 | United States
Carbon Nanotube Crossbar Based Nano-Architecture
>> Design for a carbon nanotube microprocessor that could lead to a new approach for creating CPU's.

Todd Wolf | 9,177,154 | United States
Remediation of Computer Security Vulnerabilities
>> A computer vulnerability patching system that uses the exploit itself as a tool for applying the patch.

I-Corps™ Recognition
The National Science Foundation awarded $50,000 grants to UTSA investigators and their teams, with the goal to identify valuable product opportunities that can emerge from academic research. This grant also provides entrepreneurship training to the participants by combining experience and guidance from established entrepreneurs through a targeted curriculum. All UTSA I-Corps grantees completed a joint CITE/OCI program to qualify for the national program.

Learn more about commercialization of intellectual property and technology transfer at UTSA.