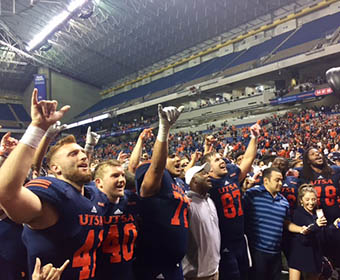 UTSA Football made history when the Gildan New Mexico Bowl announced that the Roadrunners will play against the New Mexico Lobos at noon (MT) on Saturday, Dec. 17, at University Stadium.

UTSA, in just its sixth season of play, matched the NCAA record for the fastest program to reach a bowl game with today's announcement, equaling South Alabama (2014) and Georgia State (2015), who both earned bowl invitations in their sixth campaign.

Led by first-year head coach Frank Wilson, the UTSA Roadrunners finished the regular season with a 6-6 record and became bowl eligible for the first time in program history with their 33-14 victory against Charlotte on Nov. 26.

"The Gildan New Mexico Bowl is proud to host the Roadrunners and UTSA fans for their first ever bowl game," said Jeff Siembieda, Gildan New Mexico Bowl executive director. "There is a genuine, special excitement around this program and there should be. UTSA is a good, fun football team and we look forward to having them in Albuquerque."

The 2016 Gildan New Mexico Bowl will mark the third all-time meeting between the Roadrunners and the Lobos, as they split a home-and-home series back in 2013-2014 with each squad winning on the other's home field. The Roadrunners opened the 2013 campaign on Aug. 31 with a 21-13 victory against the Lobos in Albuquerque and New Mexico followed that up with a 21-9 triumph on Oct. 4, 2014, at the Alamodome.

Now in its 11th year, the Gildan New Mexico Bowl traditionally has been the first bowl game of the season.