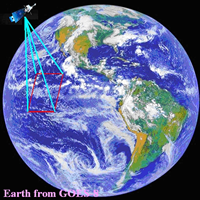 News reports about Dr. Xie and the cruise

October 19, 2018 - Dr. Xie's idea that led to the creation of a web-based open source dashboard of the North Pole featured in UTSA Today. 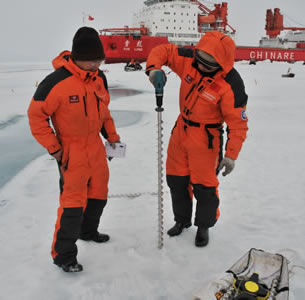 September 15, 2010 - Dr. Xie reports his trip in the China University of Geosciences, Beijing (CUG) and donates a bottle of water collected at the Polar Point to the CUG Museum.

July 1 - September 20, 2010 - Dr. Hongjie Xie invited to attend the 4th Chinese Arctic Expedition (Xuelong or Snow Dragon) to study Arctic sea ice, the one most impacted due to global warming. This is the first time that the LRSG/UTSA extends its sea ice study from Antarctic to Arctic and the third time that LRSG participates a ship-based polar expedition to collect rich sea ice geophysical data and for validation of satellite-derived geophysical products. The participation gives LRSG an unprecedented opportunity to collaborate with Chinese scientists for polar study. Xie's participation was partially supported by NOAA's Climate Research/Sea Ice Outlook Program and the NASA project (#NNX08AQ87G). During the trip, Dr. Xie reported the sea ice observations to the Arctic Sea Ice Outlook program through Dr. Jenny Hutchings at the University of Alaska Fairbanks.

The most north point the Xuelong Icebreaker reached was 88°26.52'N/176°59.88'W. This indeed reflects the significance of Arctic sea ice melting and thinning due to global warming; it was otherwise impossible for Xuelong to reach this high latitude. One of the big achievements of the cruise for the Chinese is that, for the first time, China utilized its own ship and helicopter to reach the polar point and conduct drilling, CTD, water samples, and other scientific activities in the polar point.