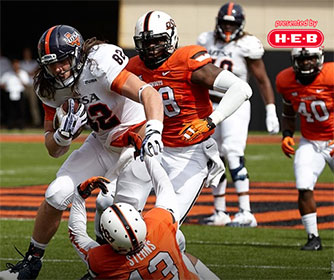 (Chicago, Ill., May 1, 2016) -- The Minnesota Vikings helped David Morgan II make UTSA history yet again on Saturday when they selected the tight end with the 13th pick in the sixth round (No. 188 overall) during this weekend's National Football League Draft. The Vikings traded up to make Morgan II the Roadrunners' first-ever NFL Draft pick.

Morgan II became UTSA's first-ever All-American this past season when he was named to USA Today's second unit. Also a second-team All-Conference USA selection last fall, he recorded 45 receptions for 566 yards (12.6 avg.) and a program single-season record five touchdowns while grading out as one of the top blocking tight ends in the country. The 6-foot-4, 260-pounder also was named to the midseason John Mackey Award (nation's top tight end) watch list.

The Marble Falls native set a then-school mark with nine catches in the season opener at then-No. 22 Arizona (Sept. 3) and matched that total five games later against Louisiana Tech (Oct. 10). His 109 yards against the Wildcats was UTSA's first 100-yard receiving performance in three seasons and his two touchdown grabs against the Bulldogs matched the program's single-game record. Morgan II earned honorable mention John Mackey Tight End of the Week accolades following both of those outings.

Last year, the Roadrunners saw Ashaad Mabry and Triston Wade sign free agent contracts with the New Orleans Saints and Seattle Seahawks, respectively, following the draft. Mabry initially earned a spot on the Saints' final 53-man roster following training camp, but was waived and resigned to the practice squad, where he spent the 2015 season.

Meanwhile, former track & field All-American Teddy Williams became UTSA's first athlete to be signed by an NFL team back in July 2010 when he inked a free agent pact with the Dallas Cowboys during training camp. Williams, who just completed his sixth year in the league, played in Super Bowl 50 with the Carolina Panthers this past season and he also has had stints with the Indianpolis Colts (2012), Arizona Cardinals (2013), Chicago Bears (2014) and Jacksonville Jaguars (2014) during his professional career.

Republished with permission from GoUTSA.com. Read the original story.