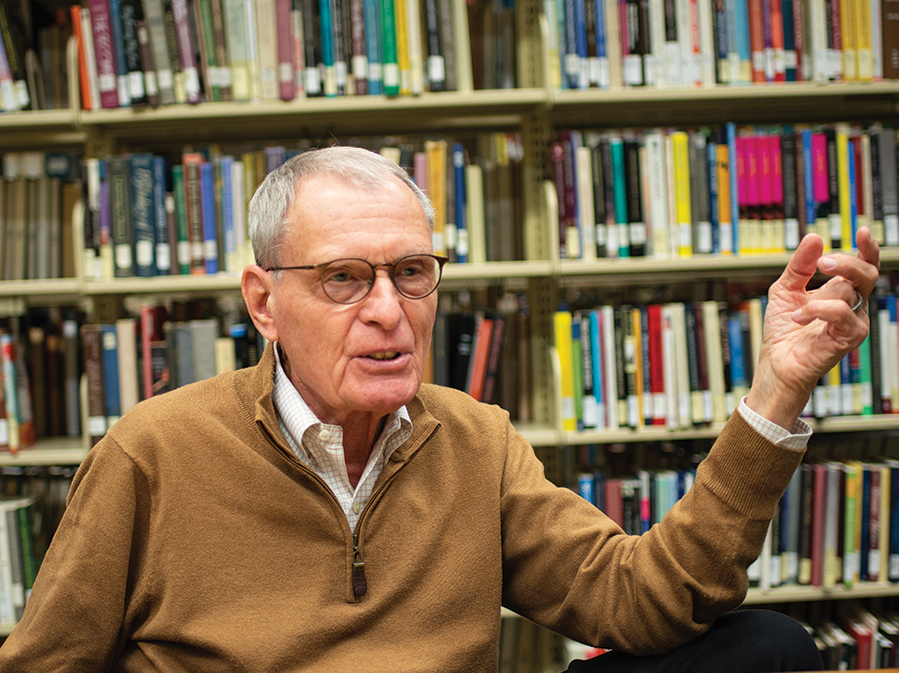 Milton Babbitt vividly remembers the optimism that rushed through the office of the Ford, Powell & Carson architectural firm when he and his coworkers found out that they would be designing the new UTSA campus in 1970. They immediately knew it wouldn’t be one of those projects that only a few people had their hands on.“Everybody was involved,” Babbitt says with a grin. “It came out of the blue. Wham! Here’s this wonderful, wonderful opportunity.”

“He said that UTSA would be a huge institution and the buildings are going to be very, very large.”

Babbitt had joined the San Antonio–based Ford firm in 1965 after graduating from The University of Texas at Austin’s School of Architecture in 1963. He helped design the Tower of the Americas with lead architect O’Neil Ford leading up to HemisFair ‘68, and the two would work together closely on the first phase of the new UTSA campus a few years later. Babbitt had a little experience with campus architecture and development, having recently finished up work on the Jesse H. Jones Communication Center at UT Austin, but the creation of the UTSA campus was a significantly greater task.

From the start, Babbitt says, Ford and his team had the foresight to see what UTSA would become. “O’Neil made the statement that a lot of people think we’re going to build another Trinity [University] out here, but that’s absolutely the wrong thing to do,” he recalls, pointing out that Trinity’s buildings were smaller in scale. Instead, the firm was planning for UTSA’s swelling enrollment in future decades. “He said that UTSA would be a huge institution, and the buildings are going to be very, very large.”

Babbitt would be the first to admit that the original Main Campus buildings are more “formidable” than “friendly,” citing the early 1970s as architecture’s “age of brutalism and concrete,” but he says the massive structures were meant to serve a purpose. They were built for flexibility. It was imagined that the addition of future colleges might require more cohabited spaces and significant restructuring. Babbitt says that the mechanical systems of the buildings were designed to make such projects more convenient, adding that the large columns in the original buildings house a number of services and utilities that can be easily swapped or altered.

When Babbitt wrote the Master Plan Summary that outlined the basic long-term configuration of the campus, density was also a major focal point. He says he’s pleased that the walkability and tight proximity of the buildings that started in the original concept has been maintained over the past five decades. “It’s a very, very compact campus for a university that size, and UTSA has respected that over the years,” he says. “I applaud everybody here who has understood that it should be as dense and pedestrian-friendly as possible.”

That density solution is one of many planning concepts used during the first phase of campus development that were borrowed from historic Spain. Another is the northwest-to-southeast orientation of the campus, a positioning that allows for more sunlight on streets and sidewalks than any other orientation as the sun crosses the sky throughout the day. The most notable one, however, was that the buildings would be subordinately placed around a central plaza with “paseos” leading pedestrians to it. Thus, Sombrilla Plaza was born.

The design for the plaza was placed on Babbitt, who was responsible for site development, which included walkways, roads, parking lots, green spaces, and outdoor courts and fields. Offering up one bit of guidance, Ford told Babbitt he wanted an area of the plaza to be shaded by “hanging sticks.” Babbitt ran with it and created what remains the greatest gathering place on Main Campus today. “It’s not even a building, but it’s one of the nicest things I think I’ve ever done,” Babbitt says, and it’s a point worth noting when one considers he would go on to restore the Empire and Majestic theaters and serve as the project manager for construction of San Antonio’s Central Library.

He takes pride in the fact that thousands of past, present, and future Roadrunners have snapped pictures in front of the Sombrilla Fountain, but he’s especially grateful because the fountain almost never came to fruition. Babbitt’s original plans included two identical fountains that opposed each other in the plaza. But Peter Flawn, UTSA’s president from 1973 to 1977, didn’t approve. He felt that the public might perceive the fountains as indication that UTSA was being frivolous and extravagant in its spending. Babbitt recounts the back-and-forth coming to a head during a meeting in Flawn’s office when even the risk-averse director of the Office of Facilities, Planning, and Construction was trying to sell Flawn on the positives of a water feature.

“[The Sombrilla is] not even a building, but it’s one of the nicest things I think I’ve ever done.”

Babbitt goes through the exchange while holding back a few chuckles: “Dr. Flawn glared at him and said, ‘You’ve been talking to O’Neil Ford, haven’t you?’ He said, ‘Well, yes, I have.’” Flawn knew in that moment that this was one dispute he wasn’t going to win, but the cunning president quickly crafted a compromise. “At that point, Dr. Flawn said, ‘OK. We can have one fountain.’”

Babbitt has accumulated a wealth of stories and architectural knowledge from his 45 years as a professional. He worked for Ford, Powell & Carson until 1985, owned his own firm for five years, and then became the principal architect at 3D/International until retiring in 2010. His appreciation for the craft is what led him to volunteering at the UTSA Institute of Texan Cultures, where he has been organizing, cataloging, and digitizing several collections of architectural plans and drawings since the summer of 2017. His excitement shines when he discusses sifting through Isaac Maxwell’s designs for gorgeous punched-metal light fixtures or poring over the materials of Ralph Cameron, the architect who designed the Scottish Rite Temple in San Antonio. “That’s like dessert,” he laughs. “That’s just fun for me. That’s not work.”

One of those volunteer projects recently brought him back to the Main Campus, where he hadn’t stepped foot in at least 10 years, he says. That day, he went through many of UTSA’s original architectural drawings at the Bosque Street Building. It was a nice nostalgia trip, but the impact of what he had done for UTSA didn’t hit him until later that day when he meandered over to Sombrilla Plaza. In all of the years that he had spent working on the campus, he had never actually taken a few minutes to relax under the shade of his creation. “I sat with a coffee under the Sombrilla and I thought, Damn, this is nice!”