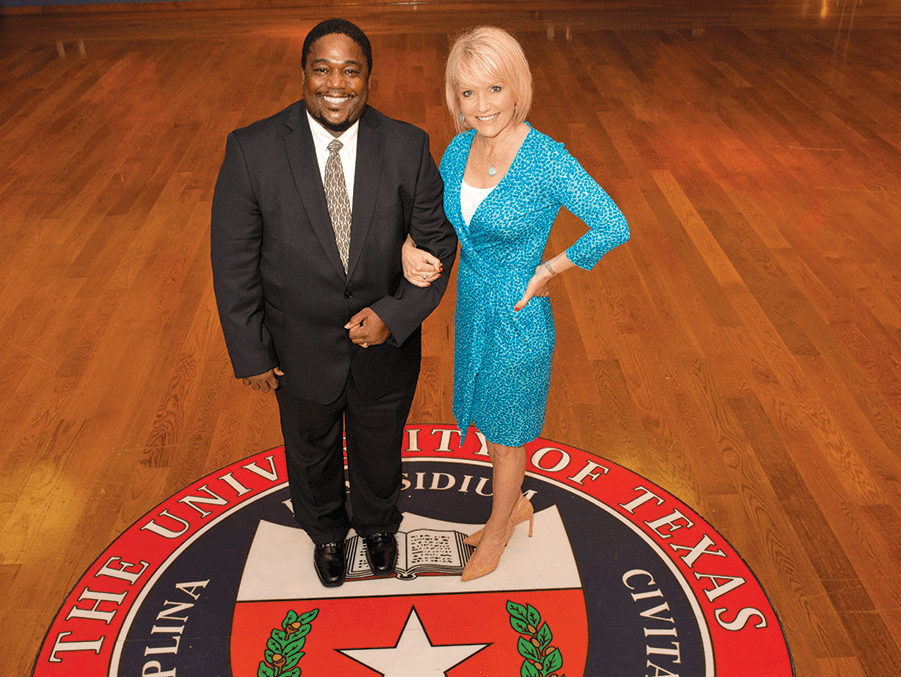 Wayne Terry ’85 and Trish DeBerry are named the first Mr. and Ms. UTSA at the inaugural homecoming

Wayne Terry ’85 and Trish DeBerry were named Mr. and Ms. UTSA in 1985 at the university’s inaugural homecoming ceremony. Since there was no football team during that era, the Alumni Association chose basketball season for the event. The pair were crowned on the court of the Convocation Center, where the ceremony was held at a men’s game.

“I remember it being very exciting for us.”

Active in Lambda Chi Alpha, elected as student body president, and involved in the university program council, Terry says no one really knew what to expect with events planning. Would activities be welcome? Would people show up?

“I remember it being very exciting for us,” DeBerry says. “We saw the work as a step in the right direction.”

DeBerry remains active with UTSA and is a former Development Board member, while Terry was named Alumnus of the Year in 2012.

The two say they reminisce when they run into each other at events around San Antonio or when visiting UTSA. A few years ago at the President’s Dinner, Terry says, their homecoming photo was part of the Through the Years theme.

“People said, ‘Is that really you and Trish DeBerry?’” Terry says, joking that he thought to himself, Let’s just push those thoughts off the table. “I had an early ’80s Jheri curl going on.”

DeBerry also chuckles at the decade of tortured, big hair: “It certainly was damaged and fried, lots of overuse of product. I don’t know how we thought that looked good.”

Both are now successful professionals in San Antonio, with Terry working as a public affairs manager for H-E-B, while DeBerry runs her own public relations firm. She spent only two years at UTSA before transferring to Trinity University because, she says, UTSA didn’t have a PR program at the time.

“I would have stayed if they’d had it then,” she says. “It’s just that the university was so new. They have a great PR program now. It makes me really proud to see how the university and degree programs have grown.”