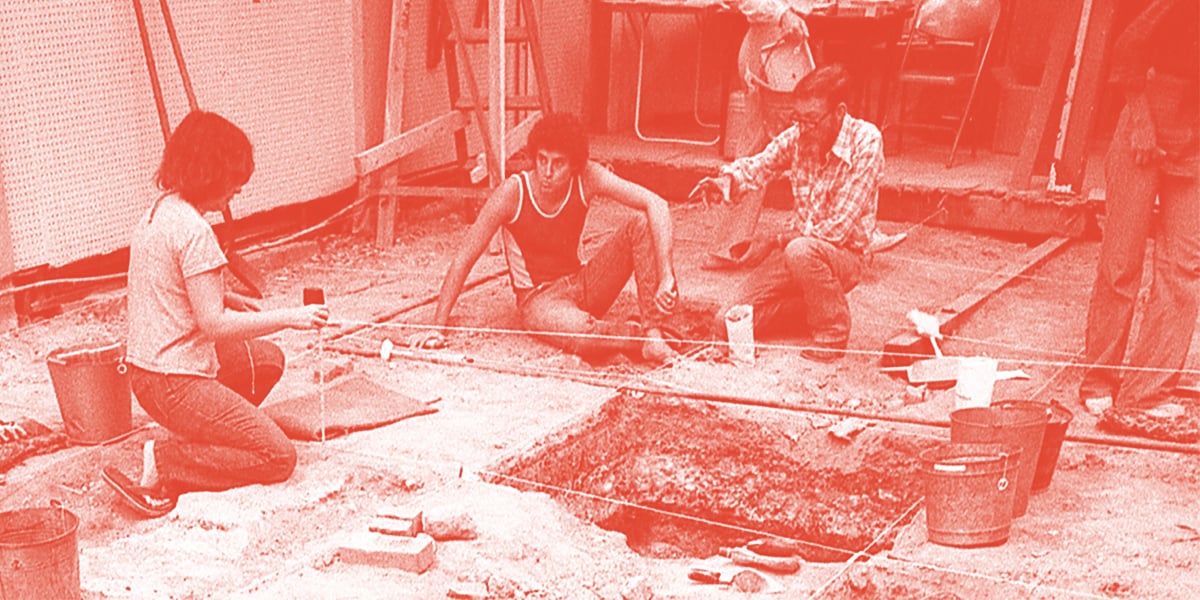 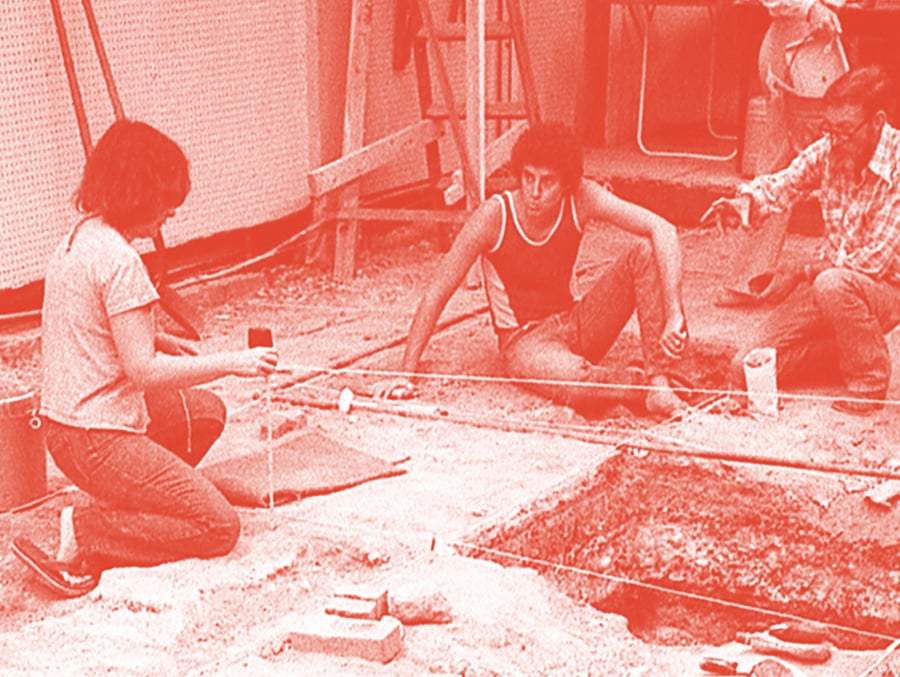 San Antonio city archaeologist Kay Hindes ’86 was in her third year as an undergraduate at UTSA when she and a colleague were working on an archaeological dig that uncovered what would become a highlight of her career—a wooden structure now known as the gates of the Alamo. “It was so cool!” she says.

“CAR is the preeminent cultural resources management organization in the region.”

She was working at the university’s Center for Archaeological Research when the UTSA team spotted the gates during a field survey on property owned by descendants of the Ruiz and Herrera families.

At the time, driving 150 miles round trip from home in Charlotte to her classes and being a mother of two, Hindes didn’t envision becoming the city archaeologist when she first enrolled in UTSA’s anthropology program. But her time at the university was transformative, she says: “The program was still pretty new under Tom Hester, and I just felt so lucky to be out there and learning from world-class archaeologists. We really had the benefit to be able to study under some really great people.”

As UTSA celebrates its 50th birthday, the university’s Center for Archaeological Research will celebrate 45 years of exploring the past to help us inform the future. Created in 1974 as the fledgling university’s second—but now oldest extant—research center, CAR now has more than 500 completed projects, many of those from the San Antonio Missions. It has been instrumental to San Antonio and the South Texas region for learning its history.

“CAR is the preeminent cultural resources management organization in the region, with a long history of successful projects and an unmatched understanding of San Antonio issues and history,” says Shawn Marceaux, CAR’s director. “We help the community interpret and preserve our cultural heritage through sponsored research projects, provide educational opportunities and training for UTSA students, including undergraduate and graduate students, and conduct outreach programs for the K-12 community as well as adult education classes, and we provide collaborative leadership, create research opportunities, deliver presentations, and produce publications.”

CAR is certified by the Texas Historical Commission as a repository for state-associated collections, and curates well over 1 million artifacts. This makes exhibits possible that may not have happened, such as one in October when the city and UTSA joined forces to present historical treasures unearthed at the Alamo—some of which had never been seen—in honor of Texas Archaeology Month. One of the highlights included a seven-inch unfired Howitzer shell.

“We got great feedback on that exhibit,” Hindes says. “It’s incredibly crucial that artifacts found from excavations in San Antonio and around the state are curated and that those artifacts stay at home. It’s a lot of work to make it happen, and Shawn and his group put in that work. They did that because of their commitment to the public. That has always been part of the mission.”

In the Beginning
Thomas Hester had just graduated from the University of California, Berkeley, when UTSA hired him in 1973 for its anthropology department. “My first class had no students,” he says, laughing, “but I still got paid! Here we were in San Antonio in 1973 and nobody knew the school.”

This provided freedom to create a program and institute without much interference. Seeing how contract archaeology was growing in the state in response to new regulations, Hester and Dean Richard Adams didn’t have a hard time convincing President Peter Flawn to start the center. Flawn appointed Hester its director.

Much of CAR’s founding is a who’s who of archaeology. Along with Hester and assistant director Jack Eaton, the first hire was Fred Valdez, who now teaches at UT Austin and received his Ph.D. from Harvard. Local historian Anne Adams Fox assisted in numerous excavations, and former research associate Waynne Cox helped “turn downtown San Antonio upside down,” Hester says. “Through Anne and Waynne’s work, many parts of the city forgotten (or lost!) were revealed, and in the process, some mythologies of old San Antonio were put to rest.”

“It’s incredibly crucial that artifacts found from excavations in San Antonio and around the state are curated and that those artifacts stay at home.”

Adams and CAR staff began the Maya program, which has since extended, under Hester’s direction, throughout Belize. There were big projects in Mexico (including missions that preceded San Antonio’s), digs at the Alamo and the other local missions, along with a growing interest in the community fueled by publicity generated from finds in San Antonio. The center’s goal of working in South Texas involved dozens of projects, field schools, and other studies, including the Choke Canyon Project, the largest in the region, with field director Grant Hall, who oversaw the production of the 10-volume report on the work.

“They made my future in archaeology possible,” Valdez says, “and I often relay field stories from those days to my current students. CAR was the place for archaeology in Texas and beyond. Some of the best training was accomplished through the center and UTSA.”

In 1987 Hester left UTSA only because at the time the university lacked a Ph.D. program and he was offered a job to teach at UT Austin. But his influence can be seen today. Hindes was one of his UTSA students and current director Marceaux obtained his Ph.D. at Austin, working with a professor who Hester helped to train. “Early on, the center was tremendous value to UTSA,” Hester says. “Immediately when we started doing projects in ’74, especially in the city, we got the front page of the newspaper and special projects got picked up by papers across the state and even The New York Times. We didn’t change the history of UTSA, but through the ’70s and ’80s the publicity helped the center, and that helped UTSA. I think the recent excitement around the Alamo has generated even more interest.”

The Excitement Continues
CAR researcher Clinton McKenzie first got Alamo fever around age 10. “It was called the Radio Shack project, but it was the excavation of the west wall of the Alamo,” he says, “and it was the first dig I ever got see. It was fascinating.” His membership in a local archaeological society got him into the project, and his love of “picking up anything off the ground,” as his family describes it, continues to this day.

He worked at the center from 1988 to 1992, but his expertise in Spanish colonialism eventually took him to the City of San Antonio’s Office of Historic Preservation, where he facilitated municipal and city code that required archaeological investigations. Now earning his Ph.D. in anthropology at UTSA, using collections from CAR brings him full circle.

McKenzie sees the work CAR does within in the city and region as an imperative, calling San Antonio an “unsung and underappreciated city.” He wants to help tell San Antonio’s story objectively, both the good and the bad that came from colonialism. McKenzie says it’s an honor to be a part of weaving the historical stories together and providing them to the public. “I’ve had the opportunity to work at all five of the missions,” he says. “I also have a love for Spanish colonial irrigation systems—the acequias—and documenting the history of them. For a guy who is into Spanish colonial ditches, it’s a pretty good life.”