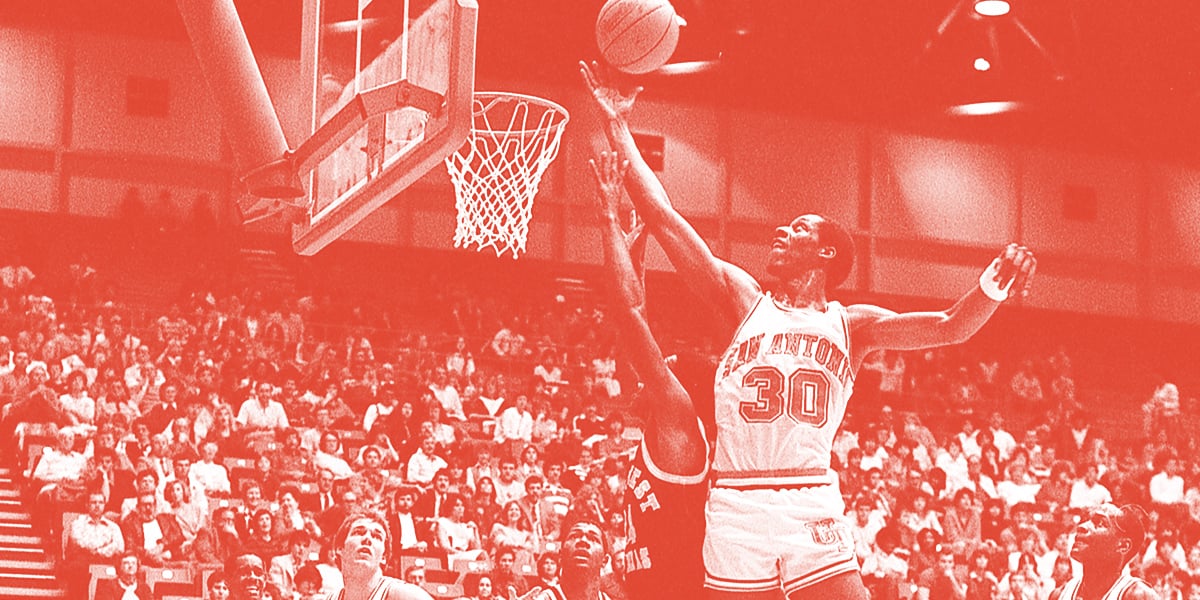 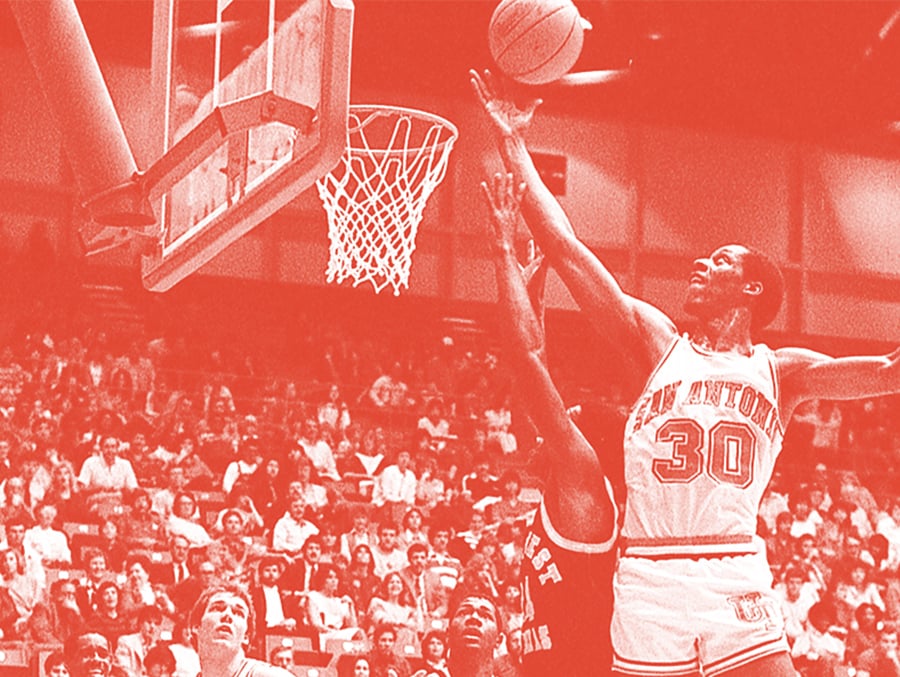 Derrick Gervin didn’t suit up for the Roadrunners when UTSA played its inaugural men’s basketball game against Arkansas in San Antonio’s Hemisfair Arena in November 1981, but he was watching intently in the stands. “I can tell you the score. I’ll never forget it,” he says. “UTSA, 42; Arkansas, 71.” It sticks in his memory because that was the night he began seriously considering a college basketball career at UTSA. “I could see that they needed some help.”

“Every week, George was on one side of the newspaper, and I was on the other.”

At that time Gervin and his mother had just moved from Detroit to San Antonio to be closer to his brother, Spurs legend George Gervin. Although Derrick Gervin was a fantastic basketball player at King High School in Detroit, he ran around with the wrong crowd and dropped out prior to graduation in 1981. He renewed his focus on education in San Antonio, earning his high school diploma and committing to playing for coach Abe Lemons and his Texas Longhorns. When Lemons was fired at the end of the 1981–1982 season, however, Gervin flipped his commitment to UTSA. He liked the university, he had good friends on the team, and his mom and brother would be able to watch him play more often. “Coming to UTSA was a blessing for me,” he says.

Roadrunner Nation felt equally blessed. Gervin quickly became a scoring sensation for the fledgling UTSA basketball program. After winning a total of only 18 games in its first two seasons, UTSA broke through with a 20–8 campaign in Gervin’s sophomore year, the 1983–1984 season. Although UTSA fell short of the NCAA Tournament’s field of 48, the Roadrunners were the second-best independent team in Division I college basketball that year, notching a better record than independent powerhouses Notre Dame, Marquette, and Dayton. For his efforts in 1984 Gervin was named Sportsman of the Year by the San Antonio Express-News. He was truly UTSA’s first athletic superstar. “Every week George was on one side of the newspaper, and I was on the other,” he proudly states. 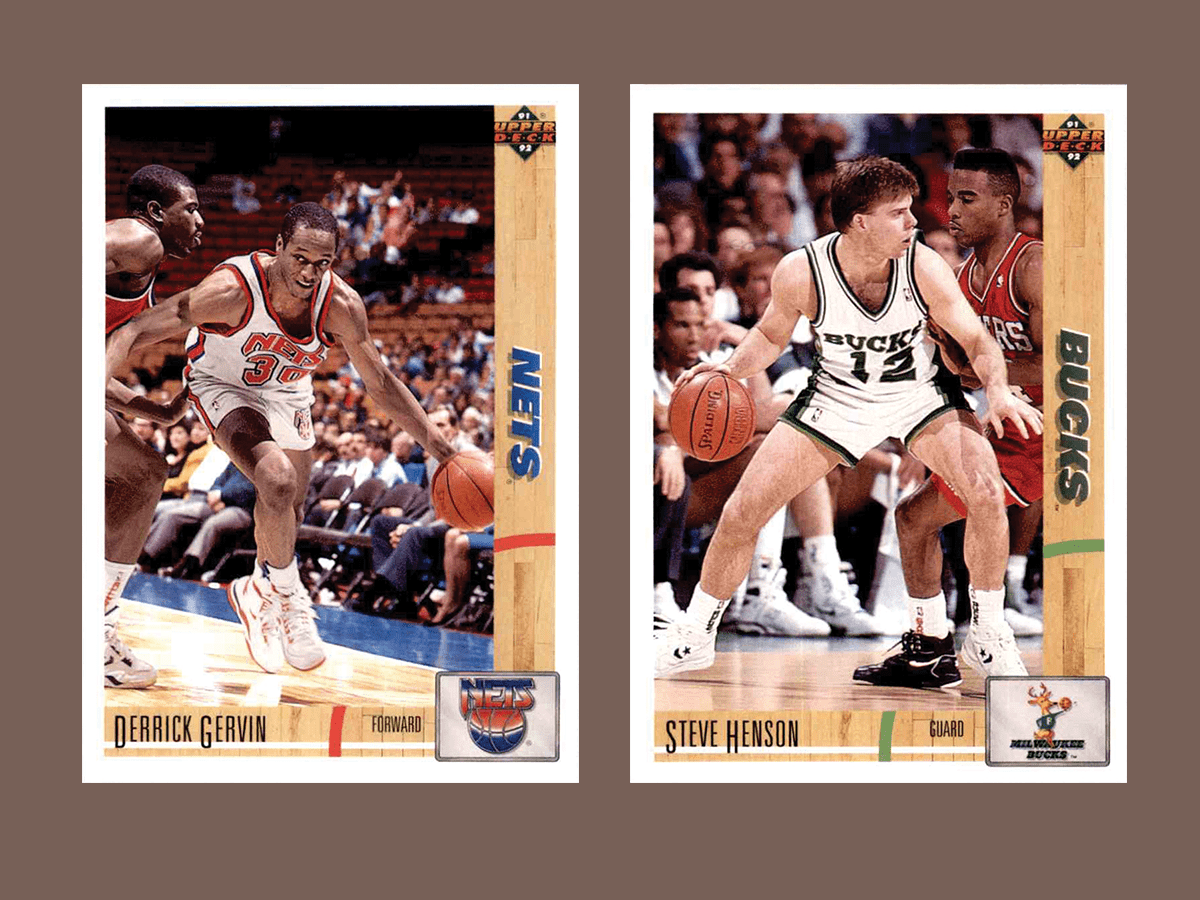 If you picked up a pack of Upper Deck NBA trading cards in 1991, there’s a chance you would have scored cards for former UTSA basketball star Derrick Gervin and current UTSA men’s basketball head coach Steve Henson. Both were featured in the same series during the 1991–1992 NBA season. Gervin was drafted by the Philadelphia 76ers in 1985 and played for the New Jersey Nets from 1989 to 1991. Henson was drafted by the Milwaukee Bucks in 1990 and ended his NBA career with the Detroit Pistons in 1999. The two are friends. Gervin occasionally visits team practices and games, and Henson has appeared on Gervin’s podcast.

Gervin left the university after his junior season in 1985 to pursue a career in the NBA. Nevertheless, his three seasons at UTSA were absolutely prolific. He was named an Honorable Mention All-American by the Associated Press in both his sophomore and junior campaigns. He averaged 21.1 points per game, which remains a UTSA men’s basketball record. In fact, he still holds 10 individual program records, including most field goals made in a game, season, and career. His number 30 jersey is one of only three retired in the rafters of the Convocation Center (along with Devin Brown’s and Monica Gibbs’).

His professional basketball career, though, was checkered with highs and lows. He was drafted by the Philadelphia 76ers in 1985 and promptly cut before the season started. He then became one of the best players in the Continental Basketball Association before finally getting his shot in the NBA with the New Jersey Nets. He cracked the Nets’ starting lineup during the 1990–1991 season, but a nagging back injury left him searching for longevity in a league that scheduled fewer games. After parting ways with the Nets, he played professional basketball for another decade in Argentina, Italy, Turkey, and Israel. He was the top scorer in the Israeli Basketball Premier League in 1996 and 1998.

It’s hard not to be intrigued by the many tales he’s amassed throughout his basketball journey—from frustrating Michael Jordan at Meadowlands Arena to getting crushed by his brother in their only professional face-off. He’s a natural conversationalist, which made him a sought-after radio show and podcast guest for many years. Gervin has since parlayed that success into his own podcast, As Good as It Gets. The sports podcast mixes current commentary with bygone memories, and he’s managed to fetch some incredible guests of his own in the podcast’s first year. Famed college basketball broadcaster Dick Vitale, sports trivia sultan Howie Schwab, and basketball royalty Julius “Dr. J” Irving and Oscar Robertson have all appeared on the show. “It’s saying something when you have people reaching out to you and you’ve only been in the podcast business for eight months,” he says. “It’s a pretty good feeling.”

“The more you try to learn different things and the more you keep your options open, the more valuable you’ll be.”

When he’s not developing his podcast Gervin is working with grade-school kids through his youth mentorship program at the George Gervin Youth Center. Aiming to improve their fundamentals in both basketball and life, his lessons were inspired by his sister, Texas State Rep. Barbara Gervin-Hawkins. “I learned from her that you have to have a plan A, a plan B, a plan C, and a plan D. The more you try to learn different things and the more you keep your options open, the more valuable you’ll be,” he says. Gervin knows that most kids won’t grow up to be college or NBA standouts, so he teaches them about other careers in basketball, such as video coordination, coaching, and event management.

He says he’ll keep coaching and mentoring for as long as he physically can. Nothing excites him more than seeing San Antonio fifth- and sixth-graders trying to make the finger rolls that his brother made famous or knifing toward the basket the way he did at UTSA. “Being around that kind of stuff gets me on a high,” the 56-year-old says. “That’s something I hope to do until the day I die.” 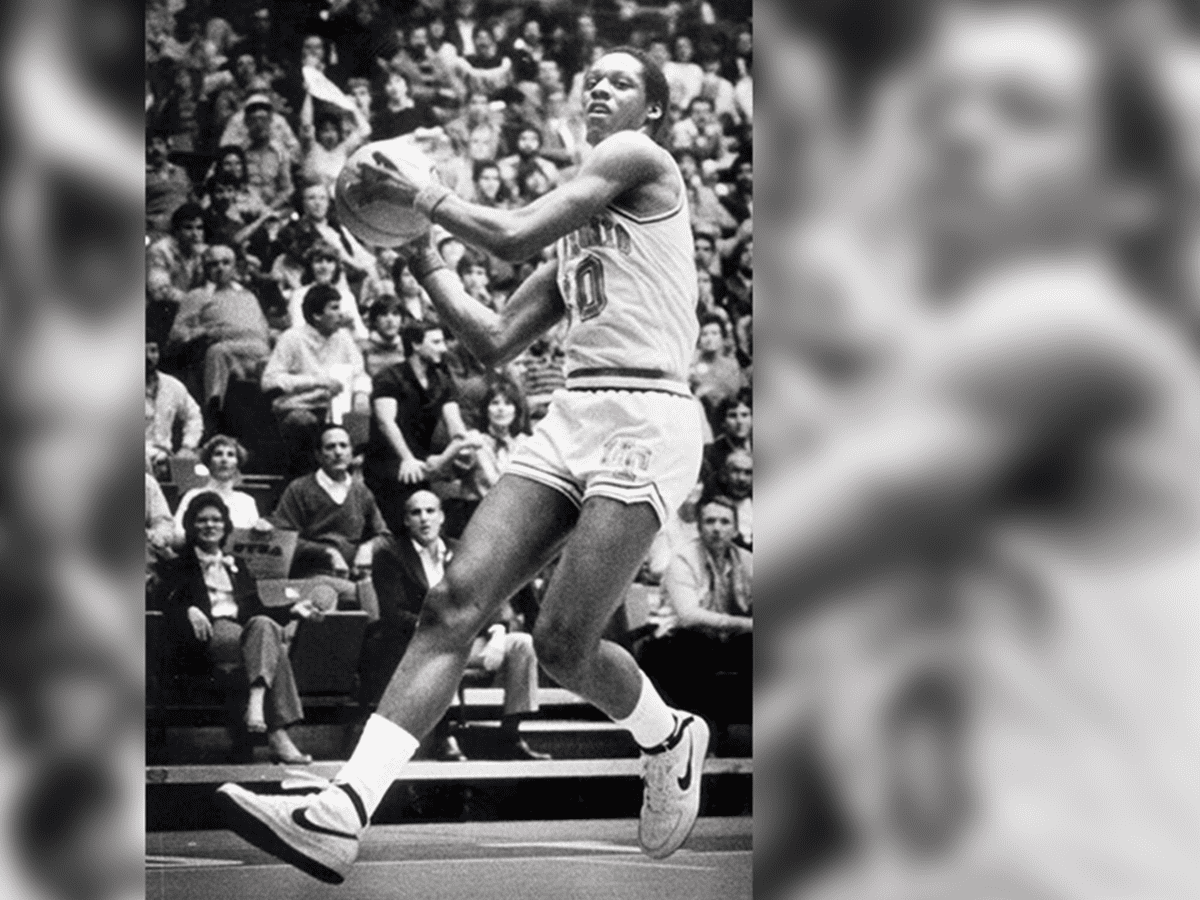 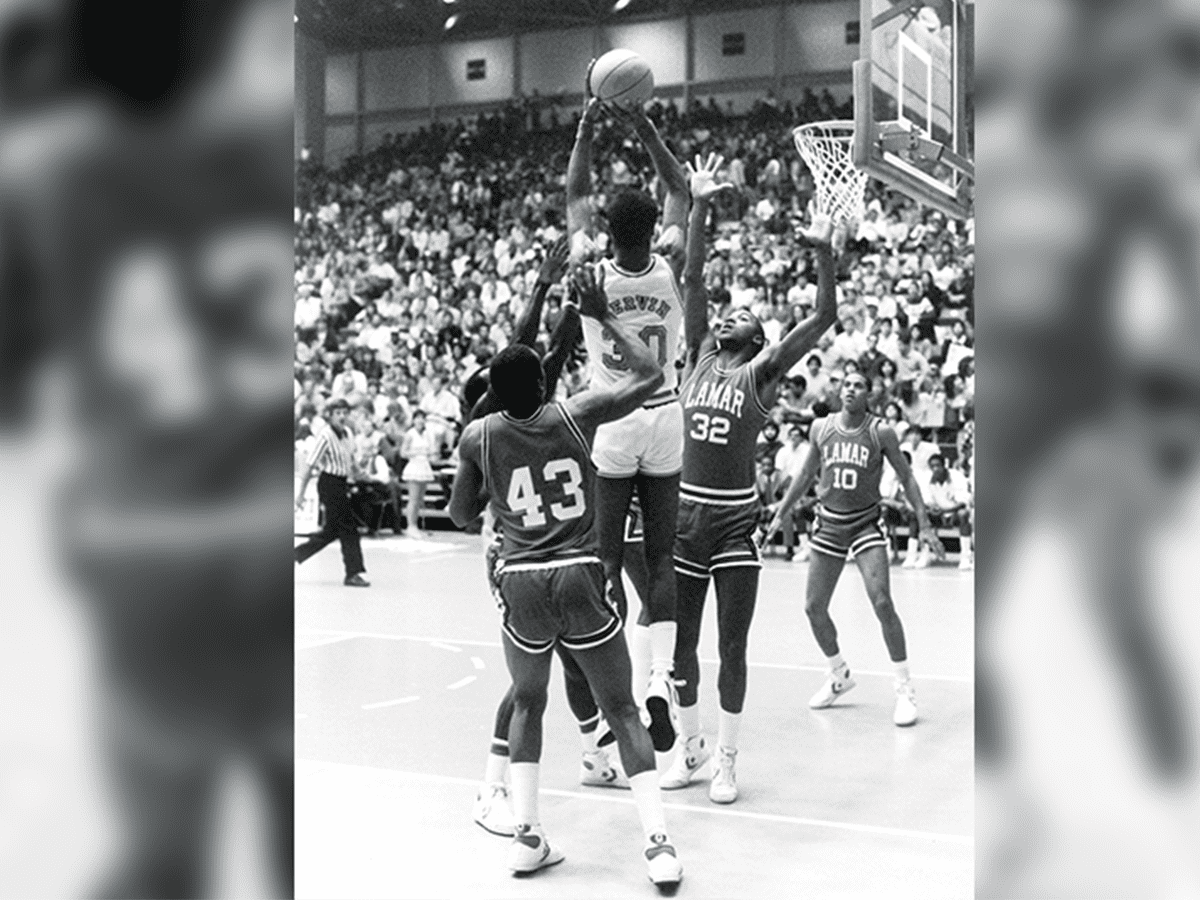 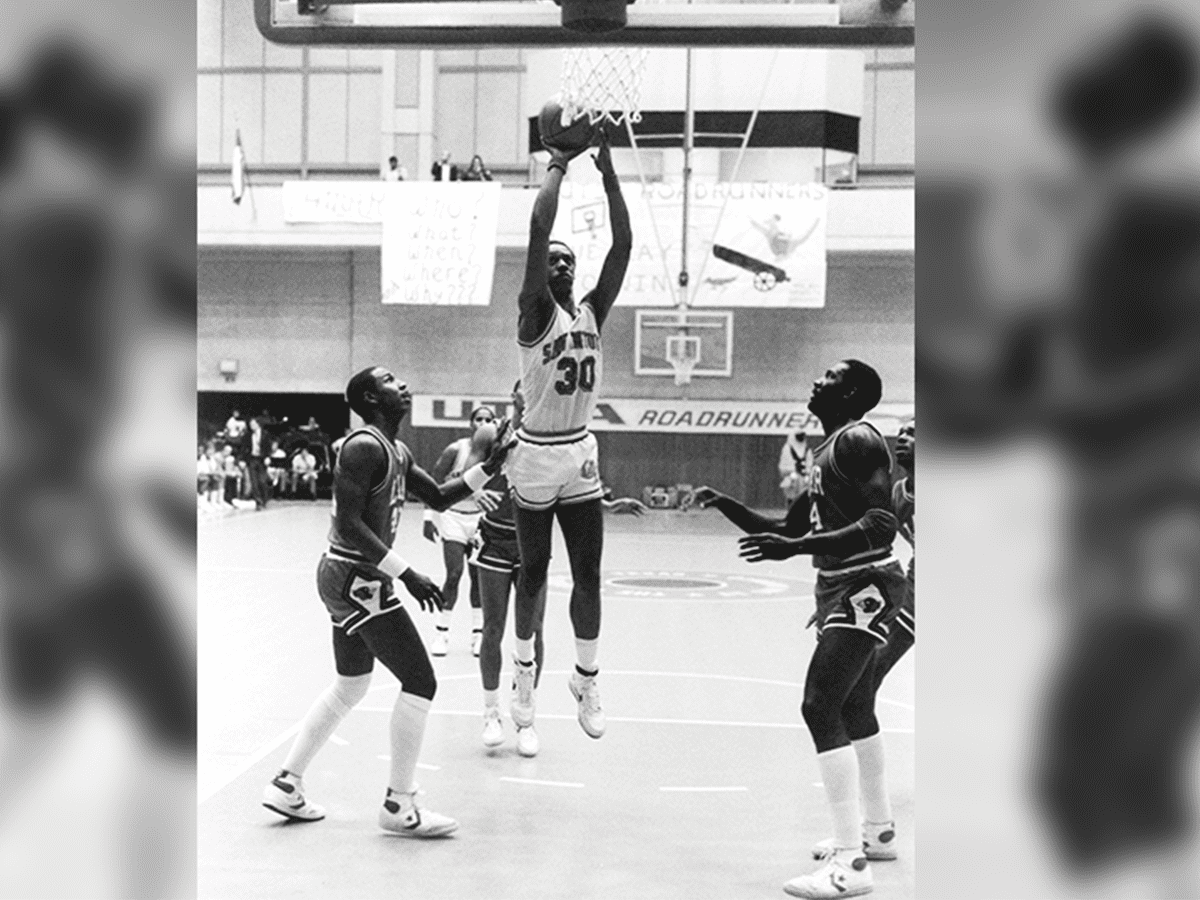 The Roadrunners’ Gervin takes a shot against Lamar. 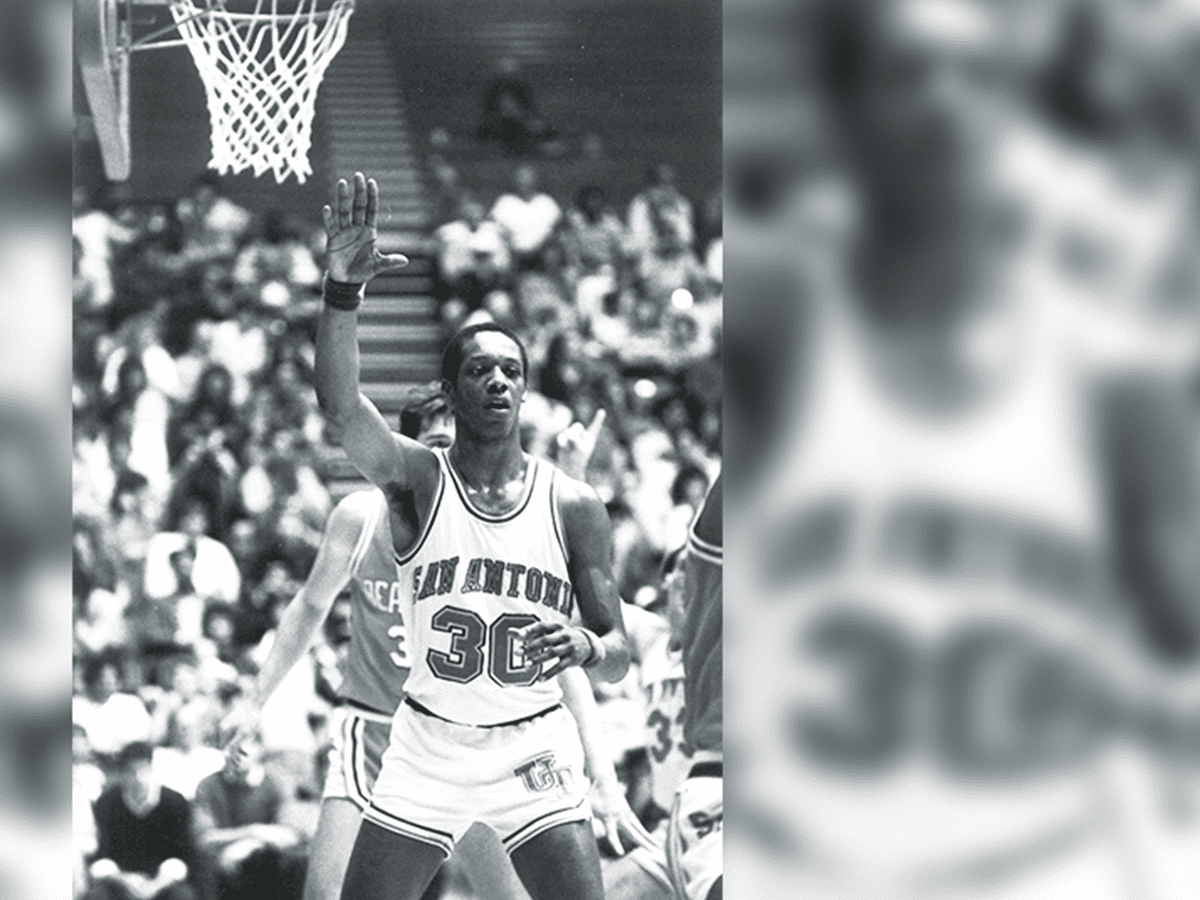 Gervin looks for a pass from a fellow Roadrunner. 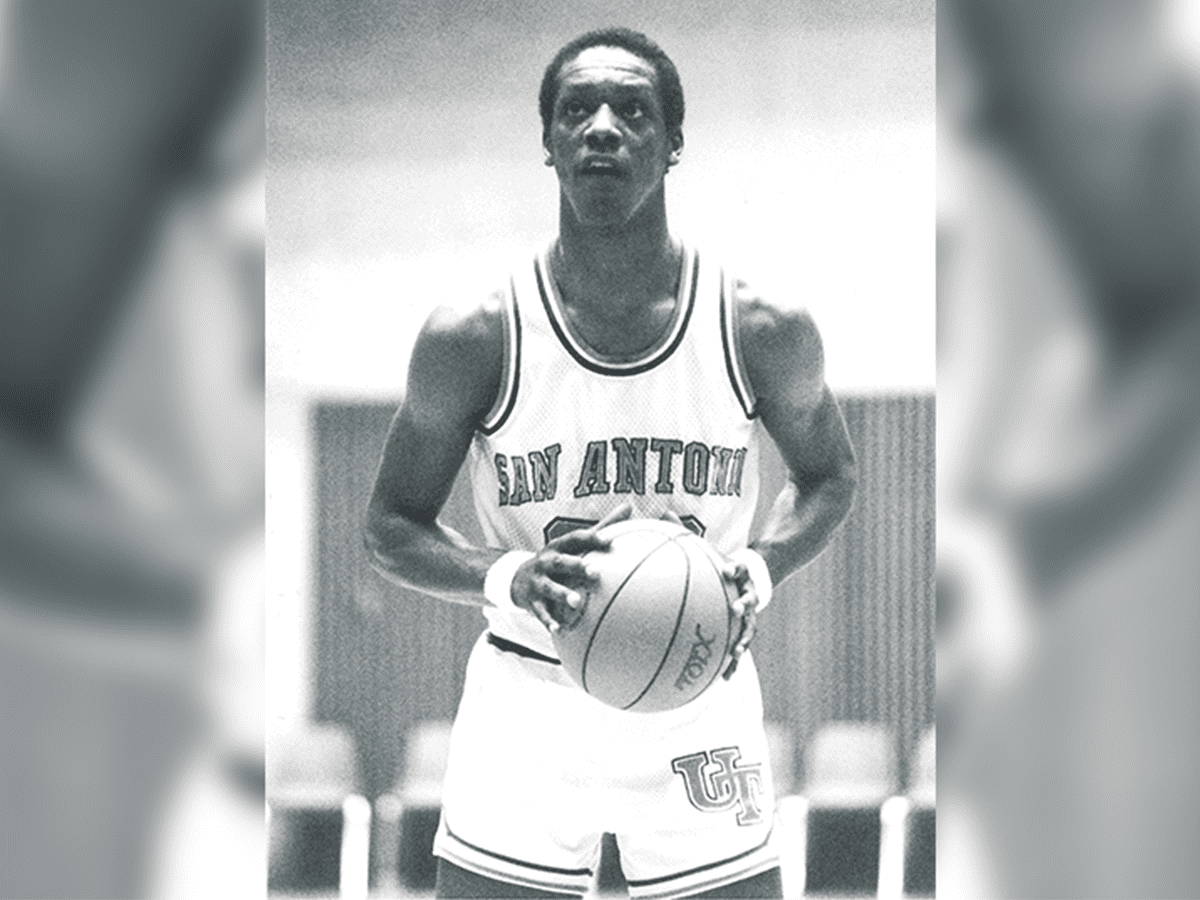 Gervin takes the line for a free throw. 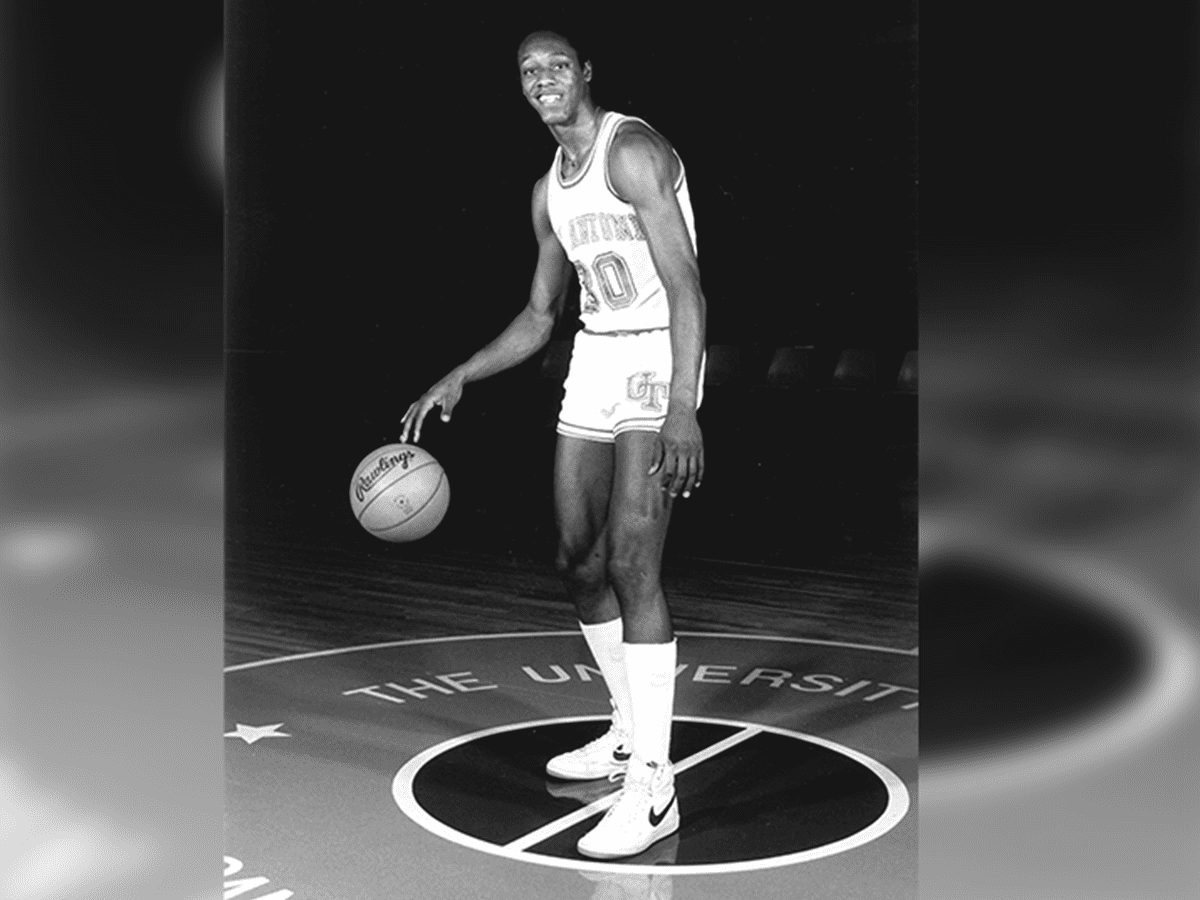 A publicity shot of Derrick Gervin. His team number, 30, was later retired by UTSA, and a Gervin jersey hangs in the Convocation Center. 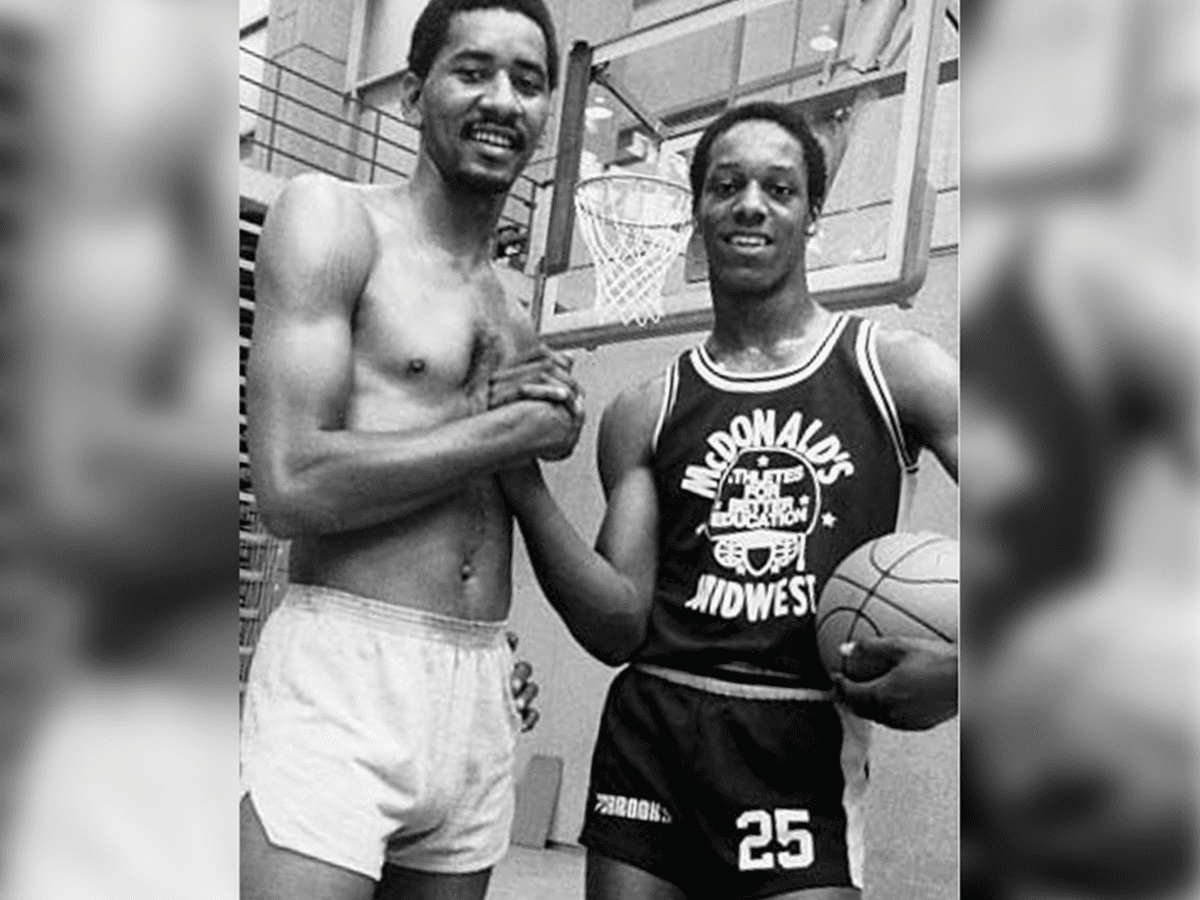 While still in high school Derrick Gervin poses for a photo with his brother, San Antonio Spurs legend George Gervin. 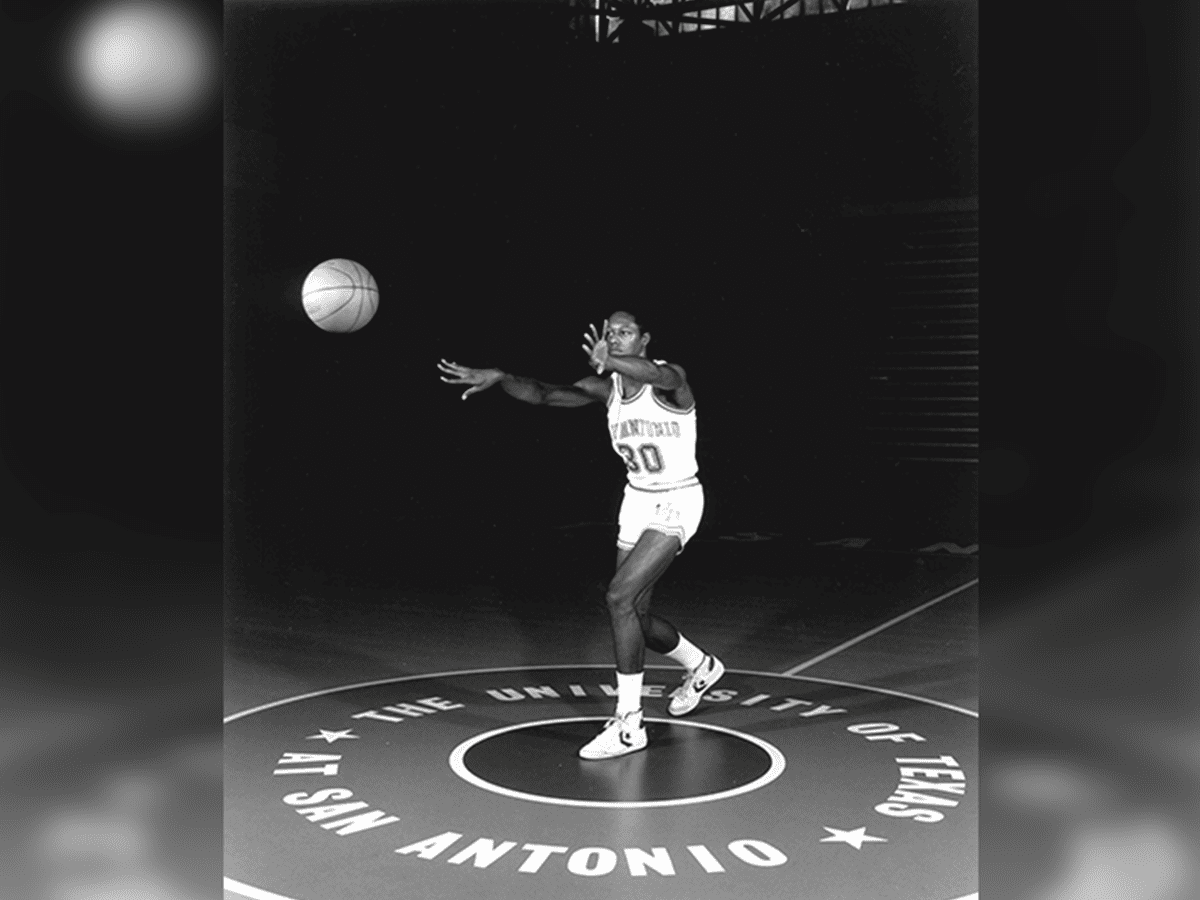 Another Roadrunner publicity shot of Gervin. 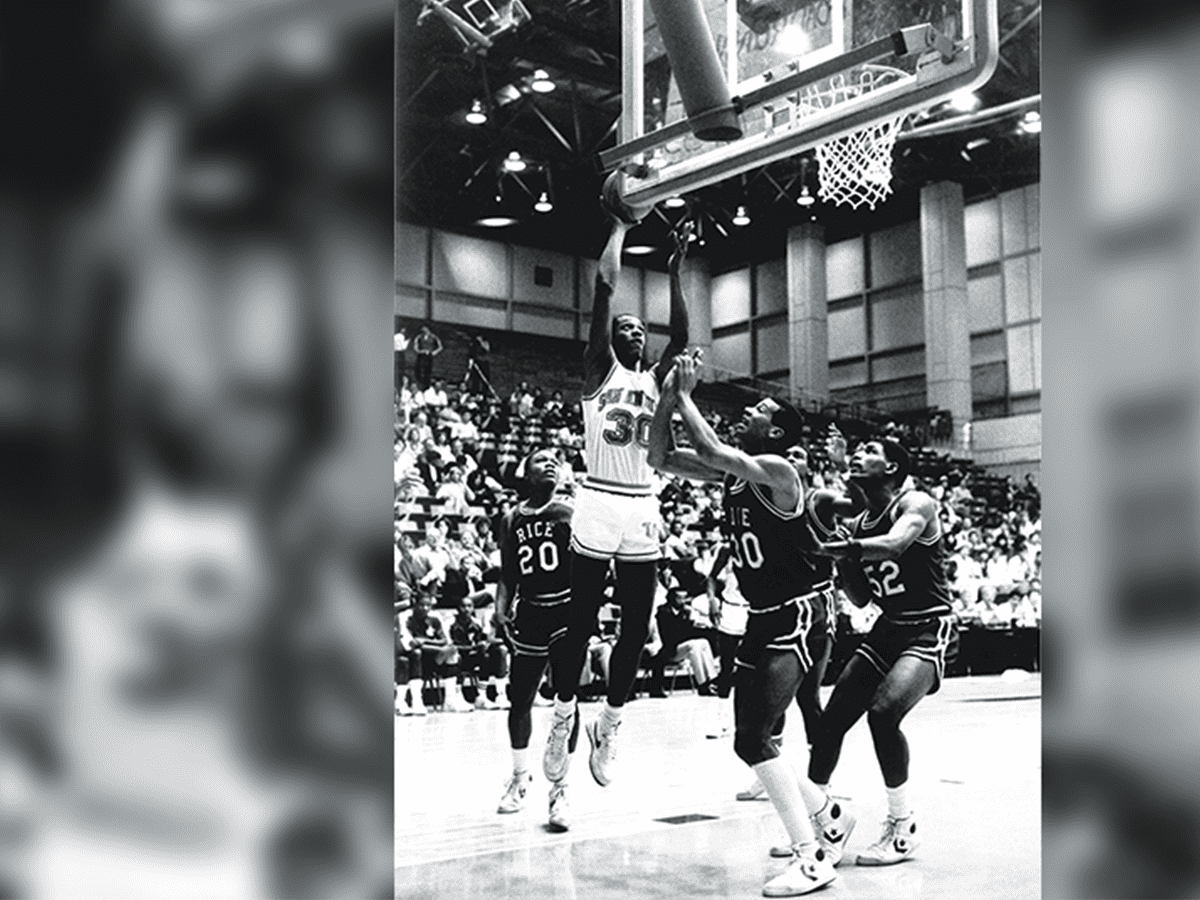 Gervin shoots a scoring hoop in a game against Rice on December 10, 1984, in his junior year. An All-America candidate that season, he was the nation’s ninth leading scorer.