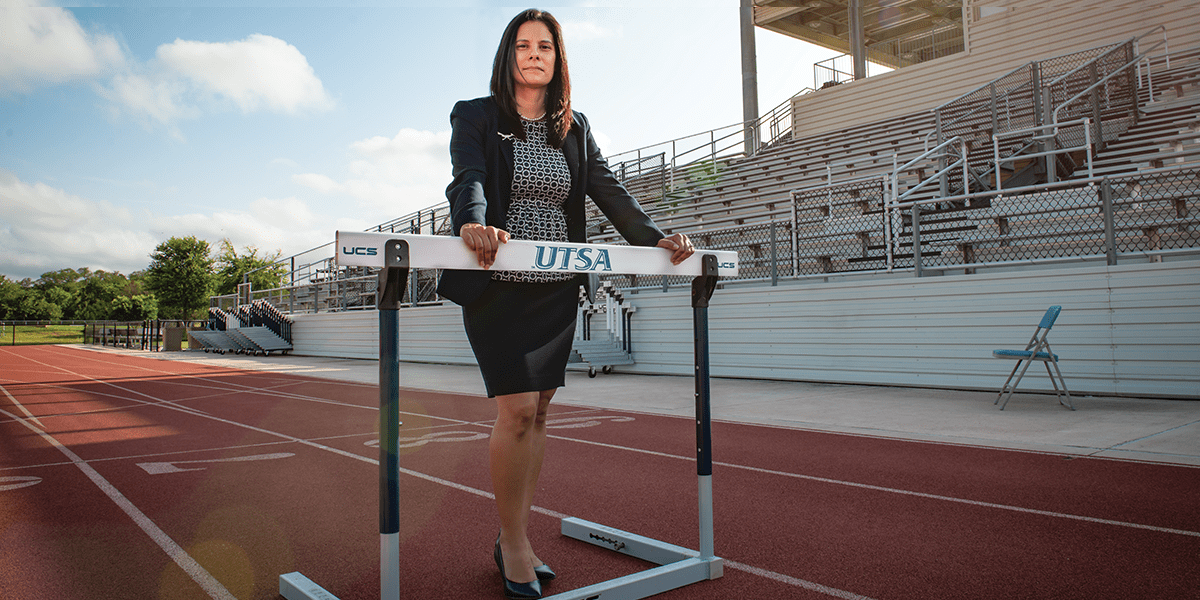 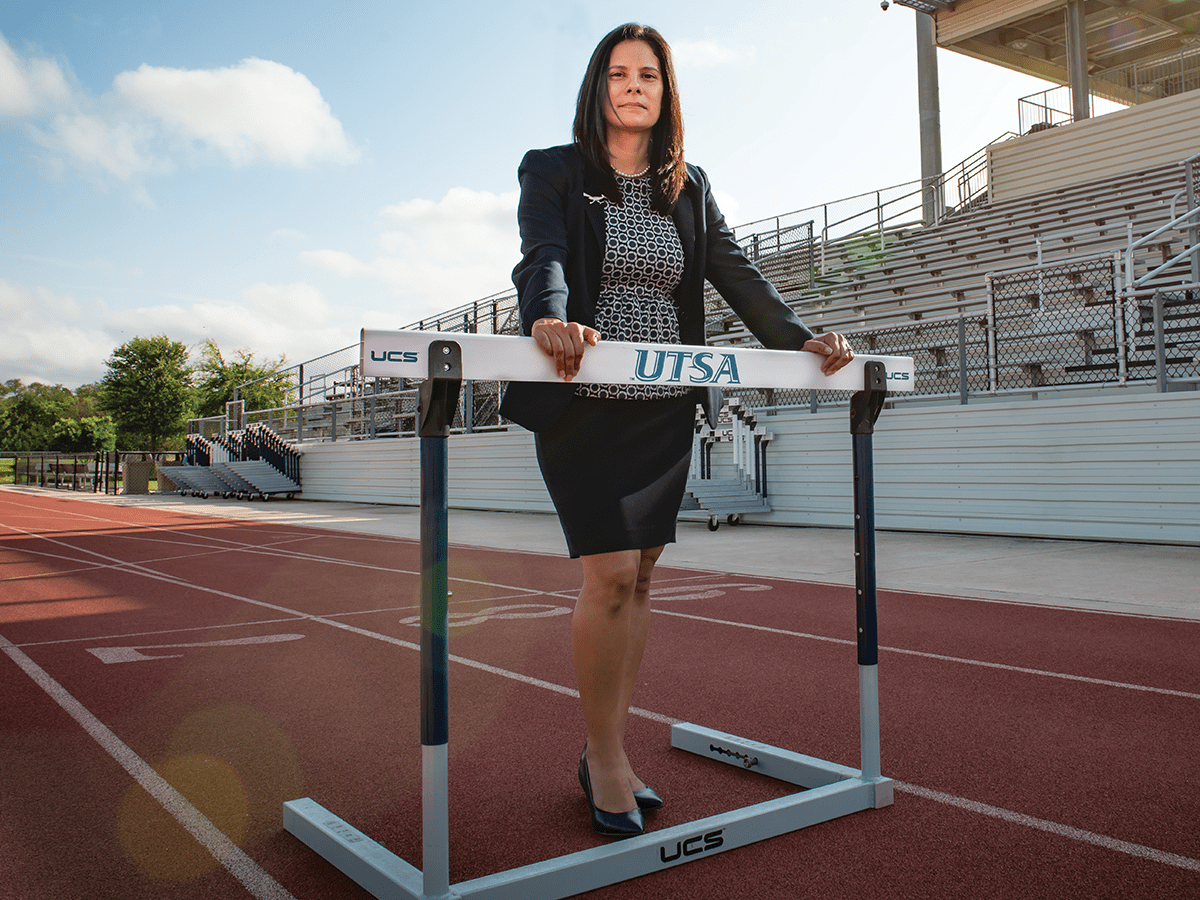 San Antonio may embrace the Roadrunners as the hometown team, but new athletics director Lisa Campos knows she can overcome hurdles to make the bond even stronger

College athletics directors often throw around the same talking points when explaining why they accepted a new job: “growth” or “opportunity” or “potential.” While Lisa Campos has already used such terms as UTSA’s new athletics director and vice president for intercollegiate athletics, her journey to San Antonio was motivated by something much more personal than a few buzzwords.

Raised in Las Animas, Colorado, Campos earned her bachelor’s and master’s degrees at Colorado State University before pursuing a doctorate in education, educational leadership, and administration at The University of Texas at El Paso. Campos is a first-generation college graduate and says she saw herself in many of the young faces she encountered as she toured the campus at UTSA, a proud Hispanic-majority institution that also enrolls about 14,000 first-generation students.

“Athletics can be such a great partner for the rest of the institution because it provides so many of the memorable out-of-classroom experiences that people think of when they reflect on their time in college.”

“That vision really aligns with who I am,” says Campos, who served as the VP for intercollegiate athletics at Northern Arizona University from 2012 to 2017 and as senior associate athletics director at UTEP from 2006 to 2012.

While UTSA was a perfect fit for her personality, Campos says she quickly made it clear that she was an outstanding fit for the university. She hit the ground running the weekend her hiring was announced in November 2017, meeting with influential San Antonio business leaders and attending the UTSA-Marshall football game. She chatted with blue-and-orange–clad supporters at the Alamodome, posed for every photo request with tailgaters, and went out of her way to high-five El Gran Beak (the die-hard ’Runner fan who dresses in colorful luchador Mexican wrestling garb) before the opening coin toss.

Campos says that uniting the community through UTSA athletics—particularly through better student engagement—will be a primary focus for her department going forward. While she has been impressed with the passion of UTSA fans and the presence of the Roadrunner brand on campus, Campos envisions frequent, lasting interactions between student-athletes and San Antonio families as well as more students in the stands at athletics events. “I imagine this athletics department being the fabric of the undergraduate experience,” she says. “Athletics can be such a great partner for the rest of the institution because it provides so many of the memorable out-of-classroom experiences that people think of when they reflect on their time in college.”

Realistically, the most significant impact will come from an emergent football program hoping to build off of two consecutive six-win seasons. “Close your eyes and imagine a sold-out Alamodome six games a year,” she says. “Imagine what that would do for the economy, the university, and the local businesses. Imagine the trickle-down effect to UTSA’s other sports. It’s a win for everybody when we support this hometown football program.” 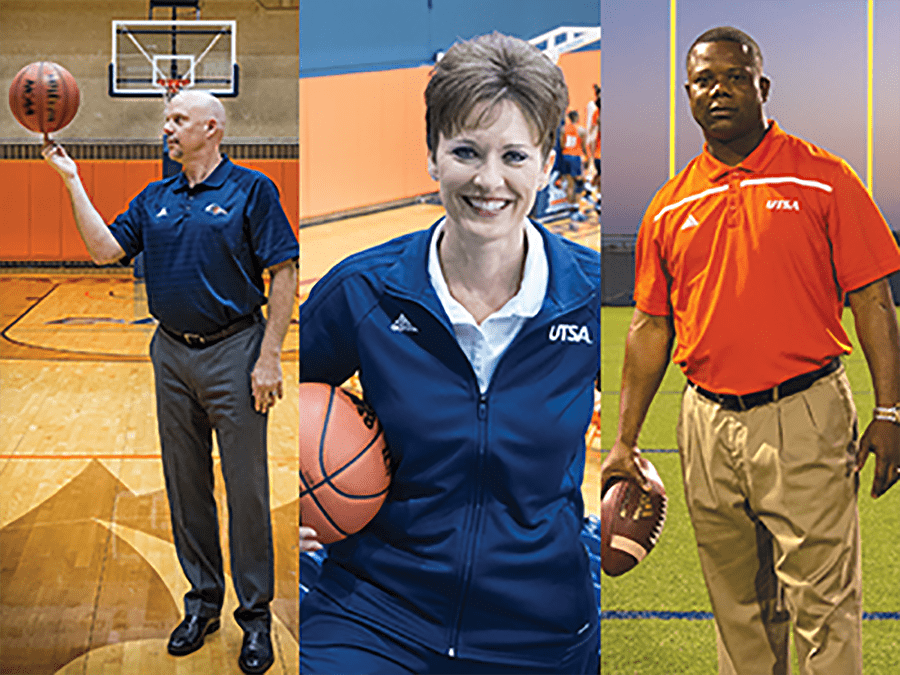 UTSA football’s stock continues to tick upward. The Roadrunners notched their first ever victory against a Power Five team (Baylor) last season and ranked second in Conference USA in average home game attendance despite the cancellation of the highly anticipated home opener against Houston. Most notably, UTSA’s Marcus Davenport ’17 was named Conference USA Defensive Player of the Year and was chosen by the New Orleans Saints in the first round of the 2018 NFL draft. Throughout the draft process— from the Senior Bowl and the NFL combine to UTSA’s Pro Day and the draft itself—Davenport and UTSA notched approximately 1 billion impressions through television, radio, and print media. Between the national media coverage and representatives from all 32 NFL teams stepping foot on campus, UTSA football’s visibility and reputation are greater than ever before.

“What he did for this university was unbelievable,” Campos says of Davenport. “That is branding and publicity that you can’t pay for, and it came through one individual who played football. When you hear Dr. Eighmy talk about athletics as the front porch of the university, that was proved through the exposure that Marcus gave UTSA at the NFL draft.”

While Campos will do everything in her power to help the football program reach unheralded benchmarks, such as a bowl game victory and a Conference USA championship, she also recognizes that too few eyeballs in the area are fixed on UTSA’s additional sports. Campos oversees 17 athletics programs in her new post, including a women’s golf team that recently won UTSA’s first conference title in her tenure and a men’s basketball program poised for a breakthrough season under the direction of 2018 Conference USA Coach of the Year Steve Henson. Campos acted quickly to give Henson a raise and a contract extension through 2024 after the team’s first 20-win season since 2011 (and only the second since 1992).

Although the commitment to Henson was crucial, she acknowledges that facilities upgrades could take the men’s basketball team and many other programs to the next level. “From a fan’s experience, a coach’s experience, a recruit’s experience, and a student-athlete’s experience, we need some major upgrades in a lot of these facilities,” she says. The baseball and softball fields earn their fair share of gripes, but much of the ire she’s heard has been directed at the Convocation Center. Campos has already fielded a number of complaints about the outdated arena—from the difficulties of scheduling staggered practices for men’s basketball, women’s basketball, and volleyball to the frustration that UTSA can’t host doubleheader basketball events because the venue has only one home and one visiting team locker room that both genders can’t occupy in the same time frame. 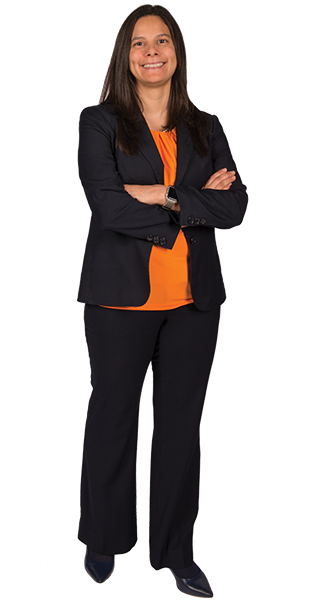 Funding and constructing a modern-day basketball arena is “definitely top of mind for a lot of individuals” involved with UTSA athletics, Campos says. “There have been a lot of different conversations about partnerships—whether it’s with the city, the school districts, or private partnerships—to build a new facility. We are definitely keeping all options open and exploring every opportunity.” She adds that fan support and ticket sales during upcoming seasons will play a critical role in investment for a new arena. Many expect the men’s basketball team to compete for a conference crown in 2019, and with a home schedule that includes Oklahoma, potential donors will be more likely to fund a new facility when crowds consistently meet or nearly reach capacity.

Campos also seeks improvements beyond game day venues. She notes that various training facilities could use some love and that it was “very important” to her that the athletics administrators move from the University Heights offices to Main Campus. Now that the athletics department has been restructured to include new executive senior associate athletics directors for external relations (Katie Douglass) and finance and strategic initiatives (Mike Bazemore), the department’s biggest priorities in the months ahead will be crafting a comprehensive strategic plan to identify needs in UTSA’s athletics facilities and individuals who can help make those improvements possible.

It’s all about building, and Campos knows how to build a winner. Northern Arizona transformed into one of the Big Sky Conference’s premier programs under her watch. She filled head coaching vacancies for men’s and women’s basketball with highly touted talent from big-time college basketball institutions. The university also earned its first NCAA national championship (in men’s cross country), 32 total conference championships, and two Big Sky Presidents’ Cups for overall competitive and academic excellence during her tenure. There’s an overwhelming sense among donors and UTSA officials that if Campos could achieve that much in Flagstaff, she’s capable of leading UTSA to never-before-seen heights in San Antonio. As she’s met with more and more proud Roadrunners, she says she was delighted by the strength of the connection between city and school. To fall back on one of those buzzwords, she sees enormous “potential” in that bond.

“It’s so obvious how passionate people are for not just athletics but UTSA as a whole,” Campos says. “They recognize that this institution can transform this city. And so do I.”