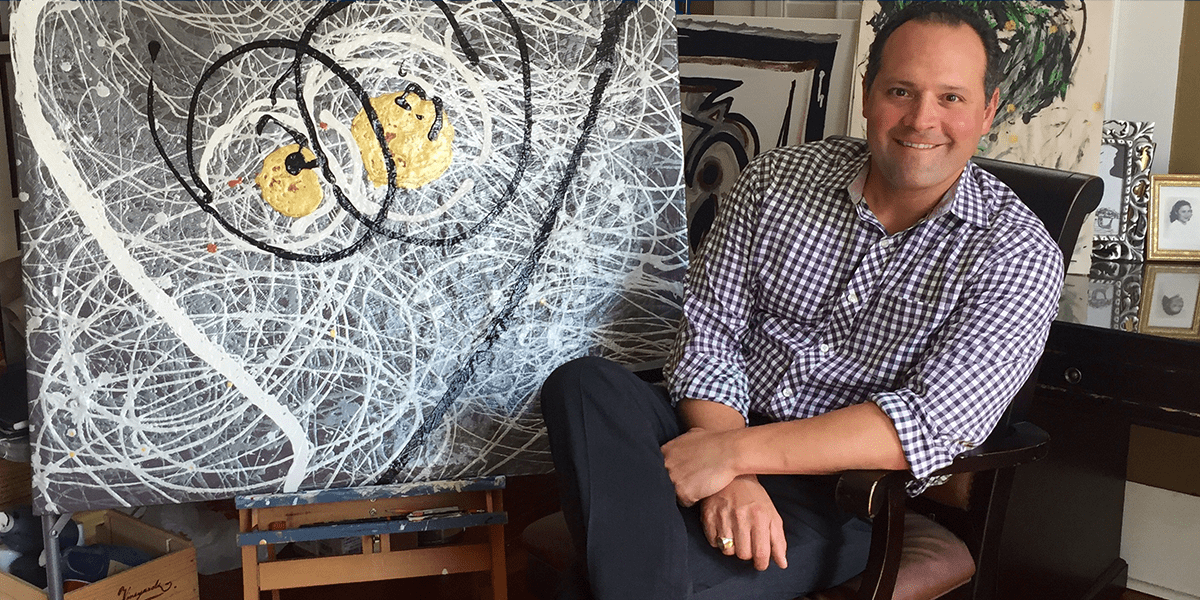 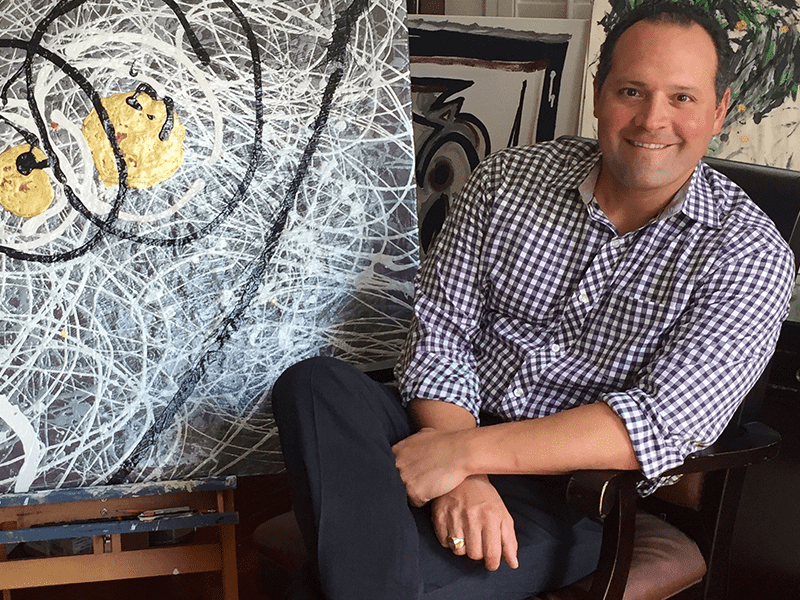 Before 2012 whenever A.J. Rodriguez created artwork it was mostly limited to napkin sketches and a few paintings in his family’s living room. Whether he was serving the City of San Antonio as deputy city manager or leading the San Antonio Hispanic Chamber of Commerce as its president and CEO, he had always put his professional aspirations before his personal passions. That mentality started to change when he attended a creative leadership program. “When I took that class,” he recalls, “I finally asked myself, What else do I want to do?”

Rodriguez’s time reflecting helped him discover that he wanted to make his artwork a legitimate endeavor. This notion was met with overwhelming encouragement from his wife, Estelle, and friends like San Antonio artist Gilbert Duran, who offered to host Rodriguez’s very first exhibition at Studio 911. Rodriguez leases studio space in the Lone Star Arts District and says creating art in that community has provided him inspiration and valuable feedback from his peers. “San Antonio is unique in that the artists here are very supportive,” he says. “It was never about territory. I never heard anyone say, ‘A.J. should stay in his box in the corporate world.’”

“It forces me to learn about things that I wouldn’t normally learn about in a deep, meaningful way.”

Over the past seven years Rodriguez has developed his own unique style with impressionist and multidimensional qualities. His abstract paintings often incorporate bold colors, distinct black lines, and precise paint splashes that portray motion. He says he has tried to maintain “similar strokes and movement,” even as his technical acumen and the subjects have evolved from series to series. He has now created collections based on the River Walk, birds of South Texas, and the relationship between human form and emotion. “It forces me,” he says, “to learn about things—that I wouldn’t normally learn about—in a deep, meaningful way.”

One of his most recent artistic pursuits led him to Mexico City’s Plaza de Toros México, where he watched traditional Spanish bullfights in an effort to capture their beauty and brutality. These experiences were the inspiration for Colores e Imágenes; Arena y Sangre, a nine-painting series that was displayed at Dorćol Distilling+Brewing Co.

Rodriguez describes the series as his “most illustrative” work. In a pair of poignant paintings, for example, he first depicts the tranquility as the two opponents calmly size each other up, followed by the intense moment as the bull digs into the dirt to charge the sword-wielding matador. Four other paintings place vivid colors from a matador’s suit in the background as the figures of the bull and fighter are rendered in the brown hues of the arena’s sand in the foreground. The figures are entangled in black and white paint splashes that symbolize the swirling battle of good and evil—as well as the majesty and messiness—of the controversial sport.

Rodriguez takes pride in the evolution of his artwork and the raw emotion he was able to communicate. “When I did these,” he says, “I felt like I had surpassed my own expectations. And that’s always a good feeling.”