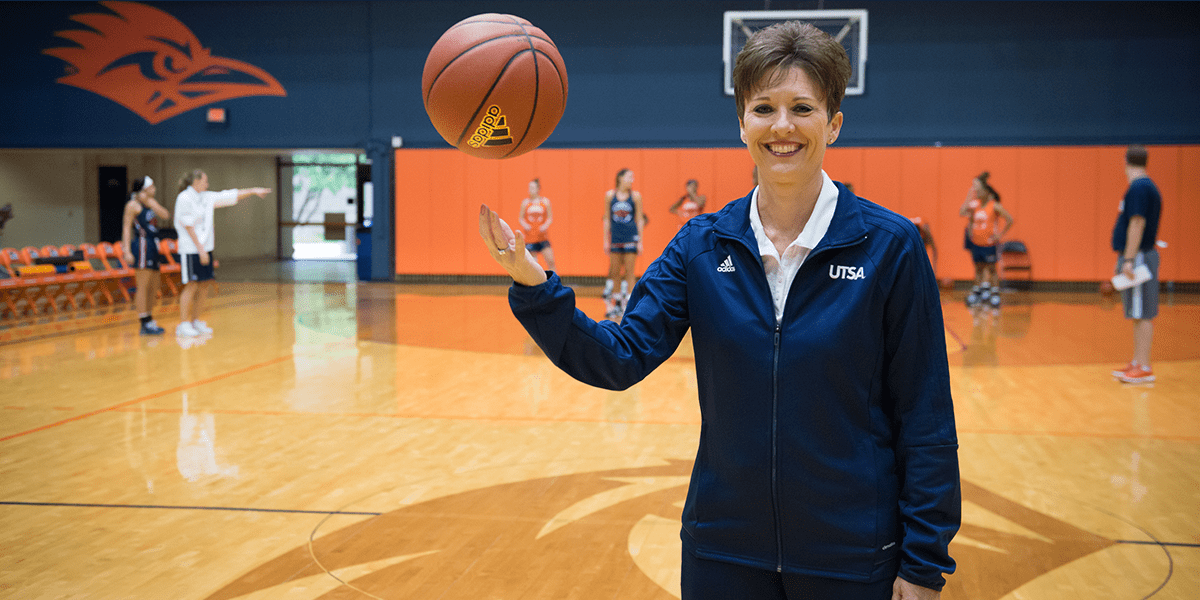 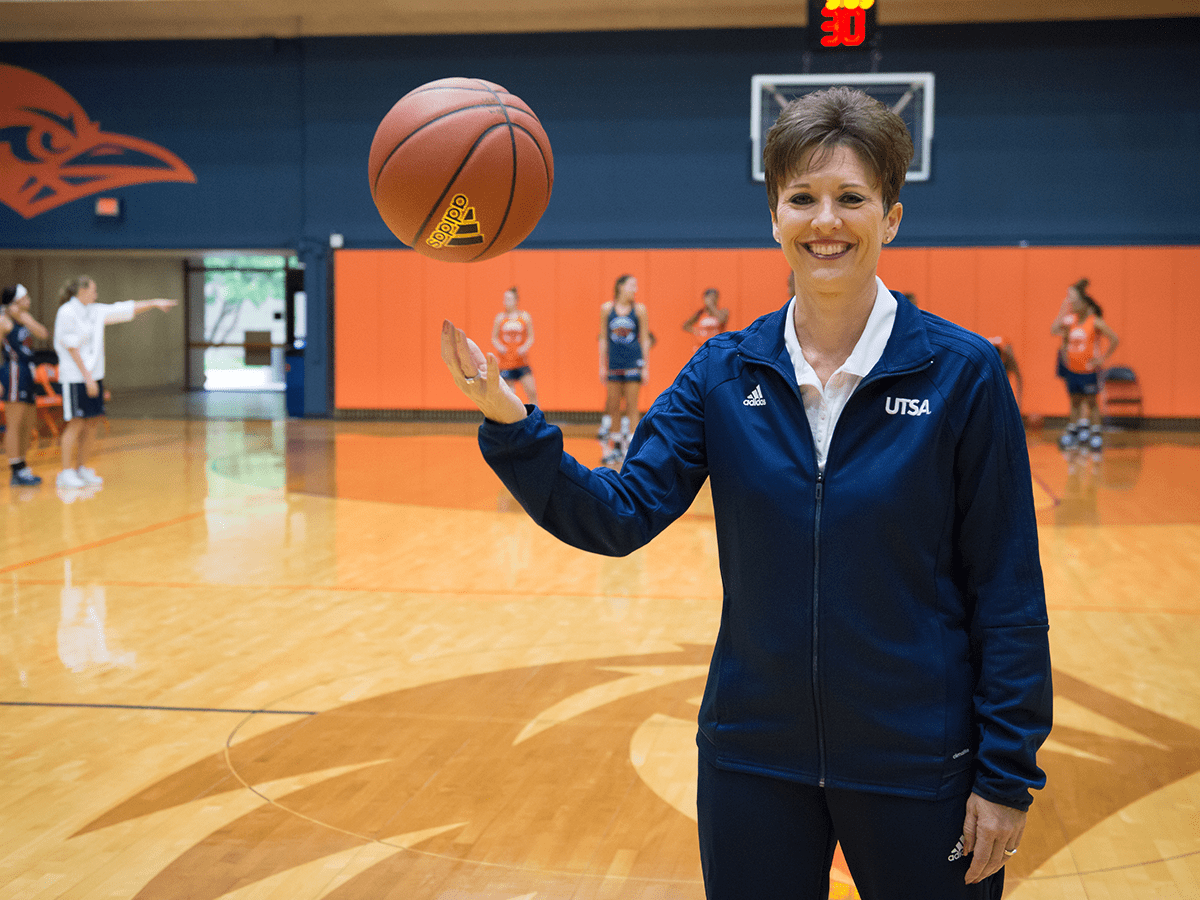 The national reputation of Conference USA wavers from sport to sport, with one shining exception: women’s basketball. Since the 1980s, women’s basketball teams in the conference have accounted for three national championships, 16 Final Four bids, and a whopping 68 appearances in the Sweet Sixteen. Louisiana Tech, Old Dominion, and Western Kentucky have all basked in long stretches among college basketball’s elite, while Middle Tennessee, UTEP, UAB, and Southern Miss have all paired successful seasons with victories over the sport’s major players.

None of these facts are lost on Kristen Holt, who wrapped up her first season as head coach of UTSA women’s basketball in March. “How many mid-major conferences can say they have teams who did that?” she says. Holt knows that snatching first place in Conference USA every year would be more of a fantasy than an attainable goal. Realistically, her hope is to see UTSA work its way into the league’s top four or five each season — but even that will require patience, ingenuity, and a fresh approach. Fortunately, she has those bases covered.

After serving as an associate coach on former UTSA head coach Lubomyr Lichonczak’s staff for four seasons, Holt made some bold fundamental decisions when she took the reins in August 2017. Instead of running methodical offensive sets like their conference opponents, she installed a “motion” offense that succeeds through increased movement, crisp passing, and breaking down defensive sets. It’s an offense that calls for players to read opponents and make adjustments on the fly. Holt feels confident that the new offensive system and the incorporation of multiple defensive sets will add up to a winning formula for UTSA. It’s difficult to prepare for a team that excels at adaptation, she notes, but these new schemes also demand rigorous conditioning and lots of time to marinate.

“Some might say, ‘Well, coach, maybe you should run something they’re used to.’ In the long run that’s not where we want our program to go,” Holt says. “This is a process. We have to stay positive. We have to get better. We have to change our mental approach to the game—and changing a mental approach is a hard thing to do.”

It was tough for the Roadrunners to stay positive over the course of a 9–21 season, but they found a way. Things really started to click when the calendar flipped from January to February. The team won six of its final 10 games, including a resounding win over Florida Atlantic in the Conference USA Tournament — the program’s first victory at the event since 2014.

Throughout the 2017–2018 season, UTSA’s younger players adapted to the talent level of Division I college basketball as the seniors rewired their basketball instincts to benefit the team going forward. Holt leaned heavily on senior playmakers Carlie Heineman and Crystal Chidomere as well as sophomore Marie Benson to score points and explore new roles in the offense. Chidomere excelled with assists, Benson relentlessly pulled down rebounds, and Heineman, known as one of the conference’s best three-point shooters, became one of the team’s most reliable ball handlers. The trio saw progress even when the team’s record took a slight dip.

“She’s introduced a lot of new things,” Heineman said of Coach Holt in January. “That’s maybe the reason we haven’t won as many games — because it’s a lot to take in. We’re adjusting to different schemes and concepts that our previous coach didn’t run and, for a lot of us, that our high school coaches didn’t run. But we know what she’s trying to accomplish.”

Discussing players who earned their first significant time on the court during the 2017–2018 season, Holt notes that freshman point guard Tasharian Robinson and sophomore forward Tija Hawkins steadily became key players that she expects to make huge contributions in the next few years. She says sophomore Tîmea Tóth and senior Billie Marlow made big strides as post players during a two-day tournament at UTRGV. Holt’s also proud of the excellent effort and communication that junior Kourtney Kekec provided on the floor.

This isn’t the first time that Holt has been making the calls for a Division I women’s basketball program seeking a turnaround. After working as an assistant coach at Xavier, Radford, and Wichita State, Holt served as the head coach at Colorado State University from 2008 to 2012. In the three previous seasons before Holt’s head coaching stint in Fort Collins, the Colorado State’s women’s basketball team posted a 21–69 record with a mere five wins in the Mountain West Conference. In Holt’s four seasons at the helm, CSU won 50 games, including 25 conference matchups, notching a third-place finish in the Mountain West in 2012.

Holt and Colorado State parted ways shortly after the university made a change in athletic directors, but she took away several valuable lessons from her first head coaching gig that she’s applying at UTSA. She learned, for example, that it’s best to strike a healthy balance between power conference teams and smaller schools when crafting a schedule. Most important, she’s created an open dialogue with her team. Many players say Coach Holt is very approachable and thoughtful, which has been beneficial as they learn new schemes and make adjustments.

“We aren’t as tense as we were going to practice in the past,” says Benson, who describes Holt as someone who’s “easy to talk to.”

“One thing she said at the beginning of the year was that she didn’t want it to be an ‘us and them’ situation,” Heineman adds. “It feels pretty good to be able to walk into her office and be comfortable enough to ask, ‘Hey, what can I do better?’”

While she makes lasting connections with her players, Holt also hopes lasting connections will be formed between UTSA women’s basketball and the residents of San Antonio. A devout Christian and longtime advocate of community outreach since her playing days at the University of Ohio, Holt talks frequently about doing more work with the Kiwanis and Rotary clubs, or engaging in community service projects with the Methodist Children’s Hospital and Habitat for Humanity. Under her watch, the team has participated in a youth basketball clinic and staged some engaging promotions like Hoops for Troops night and a Pink Out to promote breast cancer awareness.

One of the biggest hits was Elementary School Day in early January. UTSA scheduled a game against Middle Tennessee on a Thursday morning, just so students from 10 local elementary schools could take a field trip to fill up the stands of the Convocation Center. The starters tossed out T-shirts before tip-off, as the raucous kids — many of them attending their very first college basketball game — clapped along with the band and stomped in the bleachers. Even though UTSA lost a back-and-forth game that day, Holt says she’s happy knowing that some indelible memories were made. “We’re trying to get them on our campus and surround them with our players and get to know our team. We want to spend time with them and develop relationships,” she says with a smile. “I think that can be a real difference.”