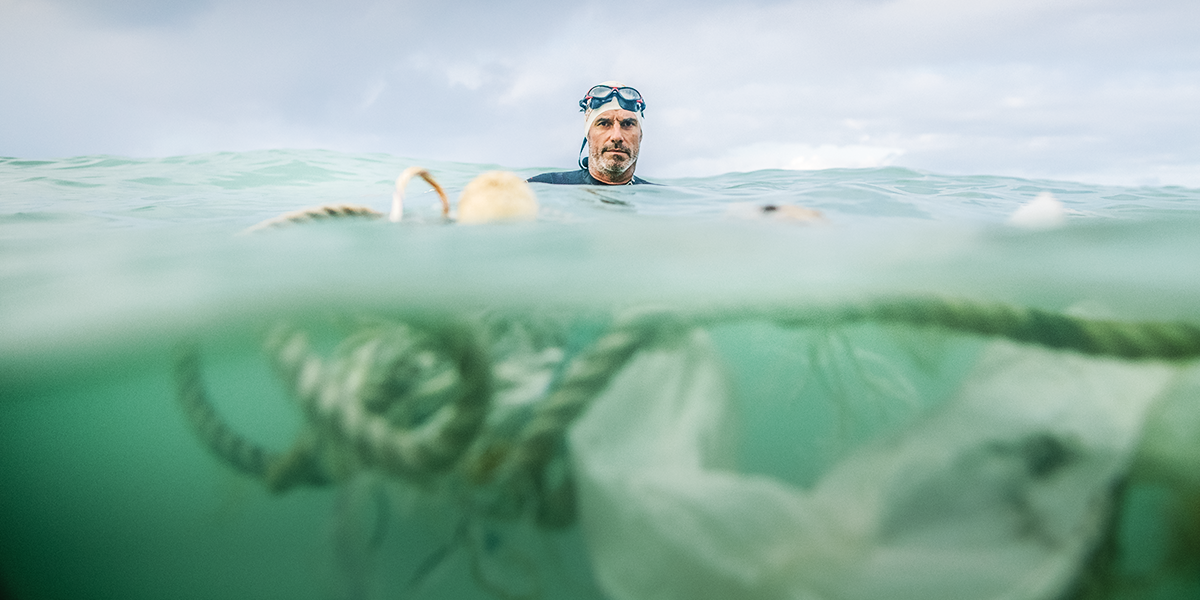 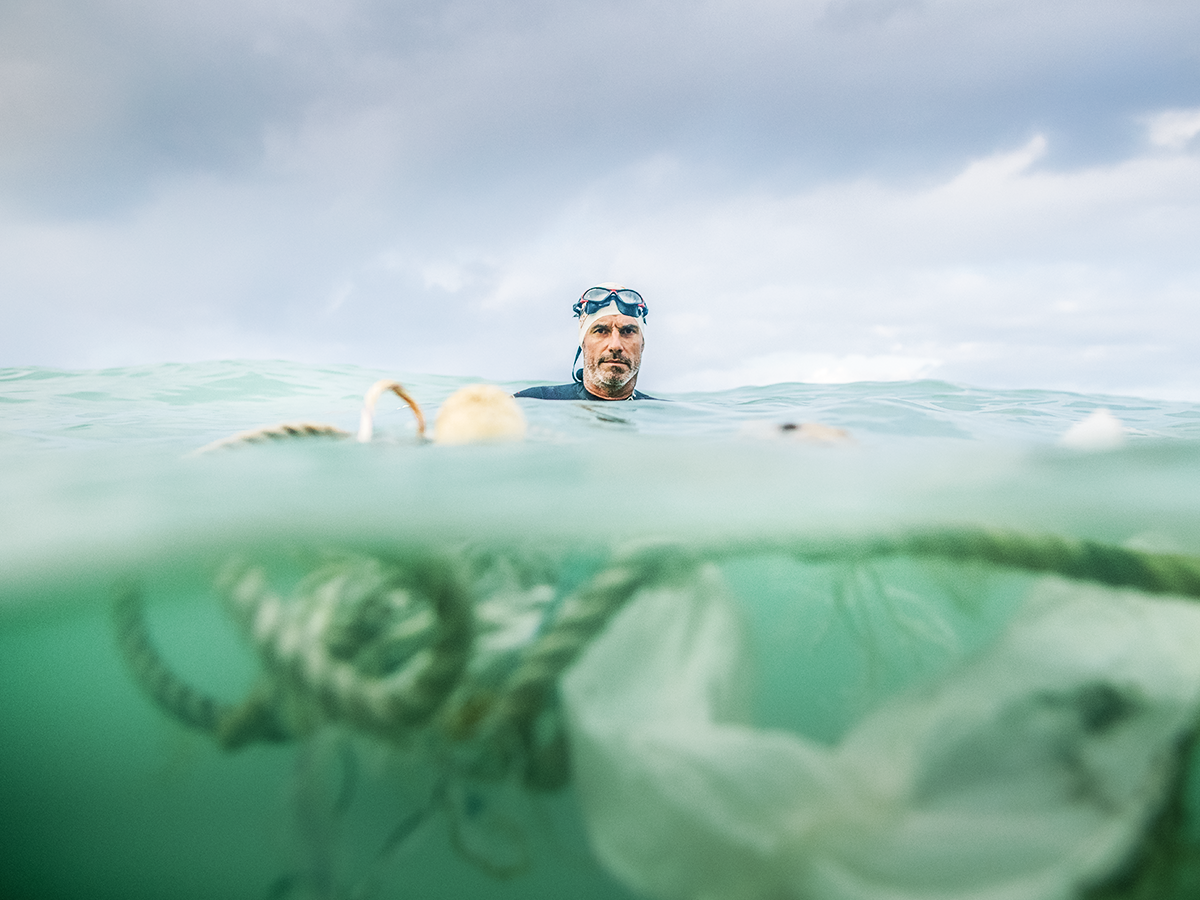 Ben Lecomte has carried with him a passion for the water since he was a child in France, but it wasn’t until he began visiting the beach as a parent that he learned the dangers the ocean is currently facing because of growing pollution.

“The big thing right now is to use what we have done to try to bring more attention to the problem.”

“For the past 10 years or so that I’ve been doing open water swimming I have seen the difference. I have seen much more plastic in the water,” Lecomte says. “I remember that when I was a little kid playing on the beach I was never playing with plastic. Now when I go on the beach with my kids we find plastic everywhere. It made me realize that in a matter of generations something has changed drastically.”

This past year Lecomte took on the mission of swimming from Japan to San Francisco through the Great Pacific Garbage Patch, a floating collection of debris, to talk about ocean conservation. While the expedition was cut short due to severe weather that damaged the boat carrying his team, Lecomte knew that couldn’t be the end of it.

And so he along with a crew of nine set sail on June 14 for the Vortex Swim on a modified route from Hawaii to San Francisco that would take them through the Great Pacific Garbage Path. The team completed the Vortex Swim in September after traveling 5,500 nautical miles with Lecomte swimming 350 nautical miles.

“The Great Pacific Garbage Patch is not known by everybody. Some people think that there is a big island of plastic in the middle of the ocean, which is not true at all,” Lecomte says. “So I think, for me, to have that Vortex Swim in the highest concentration of microplastic in the world was the way to kind of debunk the myth about the big island of plastic. It also let me use that platform to focus attention on the problem and to collect valuable data for our scientific partners.”

According to the Vortex Swim website, nearly 8 million tons of plastic end up in our oceans each year. During their 80 days at sea Lecomte’s team worked at gathering data for scientists they teamed up with by tagging large pieces of debris and collecting microplastics, which are plastic fragments no larger than 5 millimeters created when larger pieces of plastic begin to break apart.

When first encountering large pieces of debris the group photographed each to identify what type of plastic they’re made of before seeing how the items interact with the marine life and record further notes of it. “We had 15 different scientific protocols, and one of them was to track big debris,” Lecomte says. “We put like a buoy that sends a signal out so scientists can see exactly how the debris is moving and they can get a better understanding of how they’re affected by currents.”

Several of the large items that are being tracked are ghost nets, which are formed when fishing equipment is tangled together. The ghost nets attract marine life that then use it as an artificial reef.

Additionally, crew members used a small net to collect the microplastics floating in the water. “We used these samples to see how high the density was in the specific locations we were told to go to,” Lecomte explains. “If the density goes up later, then it tells us something.” When in the water, where he spent up to eight hours a day, Lecomte says there were microplastics everywhere. About 45,000 microplastic particles were collected in total. The biggest sample of microplastics collected in 30 minutes was more than 3,000 pieces. Another cause for concern are the microfibers, which are released into water systems that flow into the ocean when synthetic clothing items are laundered. Some of the first results from the collected water samples show microfibers in every sample, Lecomte says.

The group encountered several items floating on and below the surface, including crates, water bottles, shampoo bottles, and a toilet seat. Over 50 days, the group found about 1,261 items of floating trash.

With the expedition now complete, Lecomte hopes to continue to bring awareness once the research is published as well as put together a documentary with the footage collected. “The big thing right now is to use what we have done to try to bring more attention to the problem,” he says. “I think documentaries are a great way to entertain people and at the same time educate them about the issue. It’s something that we really want to resolve together.”

Unlike his earlier expedition last year, which had to be cut short after 165 days at sea, Lecomte says the Vortex Swim couldn’t have gone any smoother. “We were able to spend the three months—the time that we had previously scheduled—to be at sea. We were able to get all the data that we were looking for and trying to gather,” he says. “We got amazing footage.”

However, the trip did have its fair share of obstacles. “For everybody, I think to be isolated for that long, it’s always difficult. The fact that you don’t have any fresh food also, and it’s very limited in terms of comfort,” Lecomte explains. “Being in a bunk and always moving because of the sailboat and small space we share, everybody was affected by that in one way or another.”

Within the first 30 days Lecomte lost enough weight to reach the “last acceptable range for body fat percentage” and caught an ear infection. Despite the challenges his body faced, though, Lecomte refused to give up. “Starting something and stopping every time it becomes difficult—that’s not what I am. You define yourself and you know what your limits are when you really challenge yourself,” he says. “And that’s why I like doing these types of expeditions because everything is different. You’re going to find yourself dealing with adversity, and in dealing with that you discover yourself.”

Lecomte’s first try at open water swimming started in 1998 at the age of 31 when he swam across the Atlantic Ocean without a kickboard from Cape Cod to Quiberon, France.

Lecomte, who has a bachelor’s in marketing from UTSA and master’s in architecture from The University of Texas at Arlington, attributes his education to seeking challenges. “I think any type of education that you have, it’s always very important,” he says. “It molds your thinking, and it helps you have an open mind, even if you don’t think you’re using it. Business is something that you use no matter what you do. It’s not just about swimming or the expedition. It took me 10 years to get the funding to put this expedition together. So during those 10 years I had to develop a business around it to find the logistics and to find the people to make it. I definitely used what I learned during my study at UTSA.”