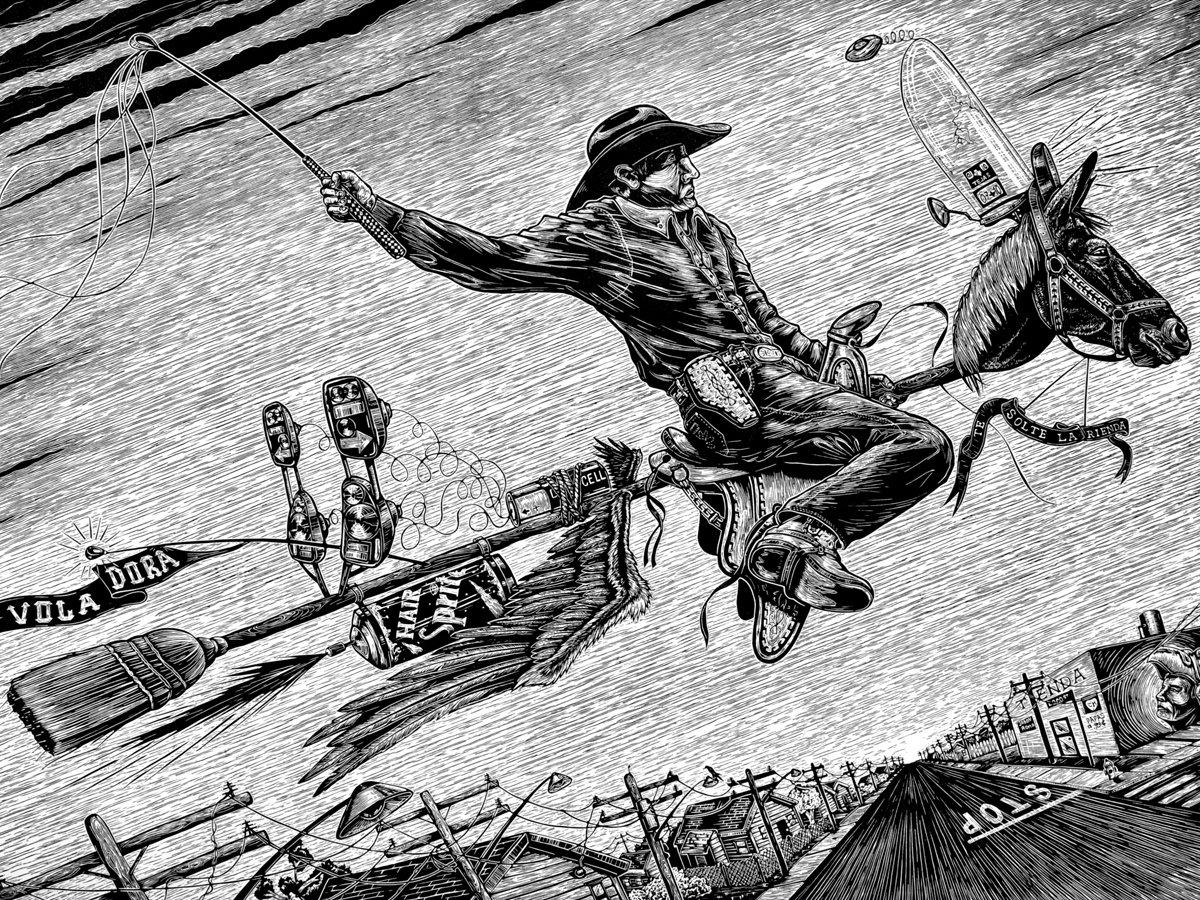 Walking the halls of UTSA’s Arts Building in a flat-billed Flying Chanclas baseball cap to an office littered with video game and pop culture memorabilia, Juan Mora doesn’t jump out as the kind of artist whose works you’d find in one of the world’s most prestigious museums. Yet it’s that approachability, unique perspective and appreciation for all things creative that makes his prints so incredibly interesting.

“UTSA’s art and humanities departments helped me be not only a better artist and teacher but a better person.”

The Smithsonian American Art Museum has acquired five linocut prints by Mora, an artist and senior art lecturer at UTSA, where he also earned his B.F.A. and M.F.A. degrees. “It’s been a wonderful experience,” he says, “but I’m not sure how I got there, to tell you the truth.”

Humble but brilliant, Mora is the first artist with UTSA ties to be featured in the SAAM permanent collection in Washington, D.C. His work is frequently inspired by people he’s met throughout his lifetime and the melding of cultures he experienced as an immigrant in adolescence.

Mora’s family immigrated to the United States and settled down in Laredo when he was 14. Living in Laredo gave Mora a heavy dose of culture shock. He was fascinated by American art, entertainment, and folklore. But certain traditions, racism, and stereotypes made life difficult for him and other immigrants in the community.

Influenced by the playful and political black-and-white illustrations of Mexico’s Taller de Gráfica Popular, Mora’s phenomenally detailed prints are often surreal portrayals of the kinds of “typical” Mexican Americans you’d find in Laredo, but he approaches them with pride, sentiment, and a healthy amount of humor that wavers between satire and whimsy.

Headed to the Smithsonian Here, Mora discusses the subjects at the heart of four of his Smithsonian-bound prints:

Montando a la Escoba Voladora (Riding the Flying Broom): “Every Sunday, I remember my grandpa and my tios—my uncles—wearing these really nice, patterned dress shirts and their vaquero hats to go to church. It was this really slick style. When I came to America, the cowboys were seen as heroic figures. They were men you’d want to imitate. I wanted to make the cowboys I grew up with heroes too. So this guy’s a super hero. But how’s he going to fly? He needs a broom!”

Bien Arreglada (All Decked Out): “American culture really transcends the border—and one movie I’ve always loved is ‘Mad Max.’ This guy is like something out of ‘Mad Max’ or ‘Conan the Barbarian.’ He’s running wild and free.”

El Animos Es Primero (Encouragement Is First): “The point of this isn’t about him being paraplegic. It’s about how he draws strength from being resourceful. He’s the epitome of working smarter instead of working harder.”

King de la Wirira (King of the Weed Eater): “This is about honoring all of those people who work hard. I was thinking about these centuries-old paintings of kings standing proudly, surrounded by luxurious things in their palaces. Why can’t I do that for this guy? He’s one of the best at his job, even if it’s not one that a lot of people want to do. Let’s put him on a pedestal—make him a grandiose figure on a really nice stand.”